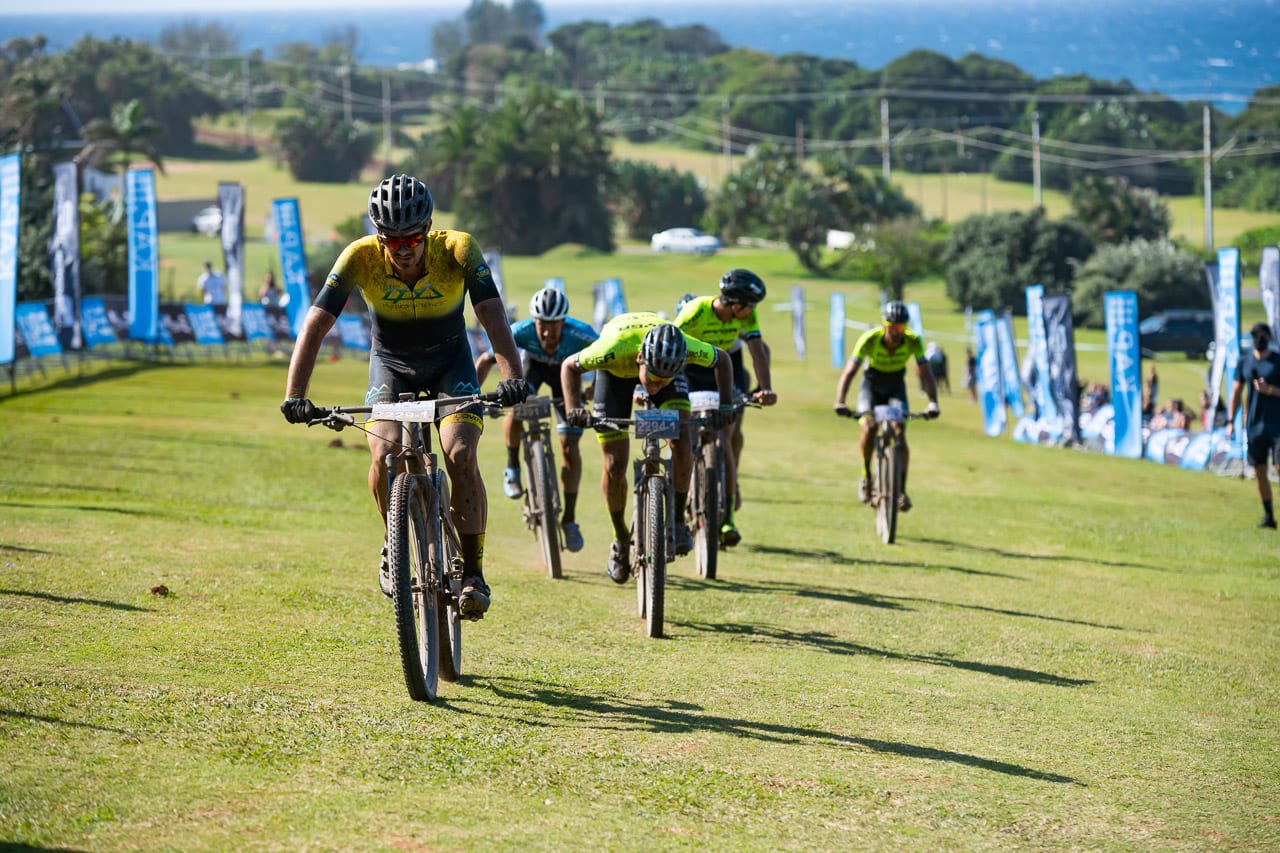 A split second men’s finish saw PYGA Euro Steel’s second team of Philip Buys and Pieter du Toit take the stage win, but with the nearly four minute gap held by the first PYGA Euro Steel team, the sprint finish was not going to take away their victory. In the women’s race, a crash for Motorlease Perigon’s Amy McDougall saw to it that the Galileo Risk Infiniti SPOT team of Theresa Ralph and Kim le Court could take the stage win, but the two previous days of powerful riding from Motorlease Perigon secured them the title.

The final stage of the three day mountain bike stage race started at Jolivet Farm and took riders through sugar cane farms, coastal forest and Vernon Crookes Game Reserve, before arriving at Scottburgh beach via the Hansgrohe floating bridge across the lagoon. The finish is a further 2kms to Scottburgh Golf Club.

The pace was fast and furious from the start with the top seven teams together for the first half of the race. DSV Pro Cycling and Absolute Motion dropped off the pace and at the 39 km mark at Vernon Crookes, the five teams of PYGA Euro Steel 1 and 2, Imbuko Giant, TypeDev NanoTime and Insect Science were left to fight it out.

The young Imbuko Giant pair challenged the PYGA Euro Steel first team in the front multiple times, with Marco Joubert surging to the front at the 46km mark. The front position then switched countless times between riders and the pace was relentless.

First across the line as a team were Philip Buys and Pieter du Toit of PYGA Euro Steel 2 (02:40:04). Second for the stage was Arno du Toit and Keagan Bontekoning of Insect Science (02:40:05), after Arno du Toit surged to the front of the group to cross the finish line first. TypeDev NanoTime’s Matt Beers and Wessel Botha take the third place on the podium after a fourth place finish for the stage (02:40:11). In third place for today’s stage was Imbuko Giant’s Marco Joubert and Rudi Koen (02:40:09), who despite a third place stage win on stage 2 as well, did not get a spot on the overall podium. Heyns and Beukes (PYGA Euro Steel 1) finished fifth for the stage (02:40:09).

Beukes says: “It’s been such a good weekend of racing, it feels like some sort of normality has returned to racing. We rode in the front to try and stay out of trouble, it was a solid day and plain sailing.”

Heyns commented on the fast pace of the day: “Everyone was fast with peaking after Marathon Champs, so this was definitely one of the harder races to win. sani2c is one of the best stage races in the country so a good one to have for the CV.

On their second place for the stage Heyns says: “We definitely decided to play it safe as it was a big group. We were not too concerned about the stage today.”

Buys says: “On this last day it’s always difficult to get away, and everyone is strong so it was even harder. Everyone was racing for third spot so we were fine with keeping it steady and
the win on this stage was a bonus for us.”

SA Marathon Champ Beers says: “A few of us tried to get away on the climbs but we kept coming back together, so everyone knew it was going to be a sprint at the end, so we are happy to be on the podium.”

Joubert: “I think everyone wanted to take the stage win, that was our goal for today. It was a superfast stage with most of it being downhill and the climbs are only about maximum four minutes effort, so you couldn’t really get a gap on the guys. We sprinted it out and took third for the stage.”

The Absolute Motion team of Henry Liebenberg and Brendan van Eeden claimed the fifth spot for the stage and in general classification.

The young Tristan Nortje from Imbuko Giant, riding in the Solo category, stuck with the lead bunch most of the day and crossed the line less than ten minutes behind the winning team (09:02:32).

Motorlease Perigon’s overall victory was never in serious jeopardy despite McDougall’s crash at about the 10km mark, which lost them significant time. At the 23km mark there was an eight minute gap between first and second, but the powerful duo of De Groot and McDougall pulled their way back to less than two minutes behind at the finish of the final stage. Their time for today’s stage was 03:10:57, while Galileo Risk Infiniti SPOT’s Ralph and Le Court finished the stage in 03:09:43.

Mc Dougall says: “We were grateful for the buffer today, you can never count your chickens before they hatch in stage racing.”

De Groot: “Amy and I have a nice rhythm and we understand each other. We both knew there was work to be done to regain our losses, so we just put our heads down and each played our part.”

Ralph: “In the beginning there was a lot of bunching and slipping and sliding through the single track and I think Amy had a crash and I am sorry for that, and we just kept on going from there. Then we didn’t see them behind us, so we just kept it going. We know the class of these two riders, if you get a gap on them its not going to last for long.”

Le Court: “We got a time gap today but that gap became small very quickly. I’m taking this year to learn, and to be in a team with Theresa and Sam Sanders is amazing.”

Danielle Strydom and Janice Venter were third across the line (03:43:20), over 30 minutes after the Motorlease pair, maintaining their third spot on the podium.