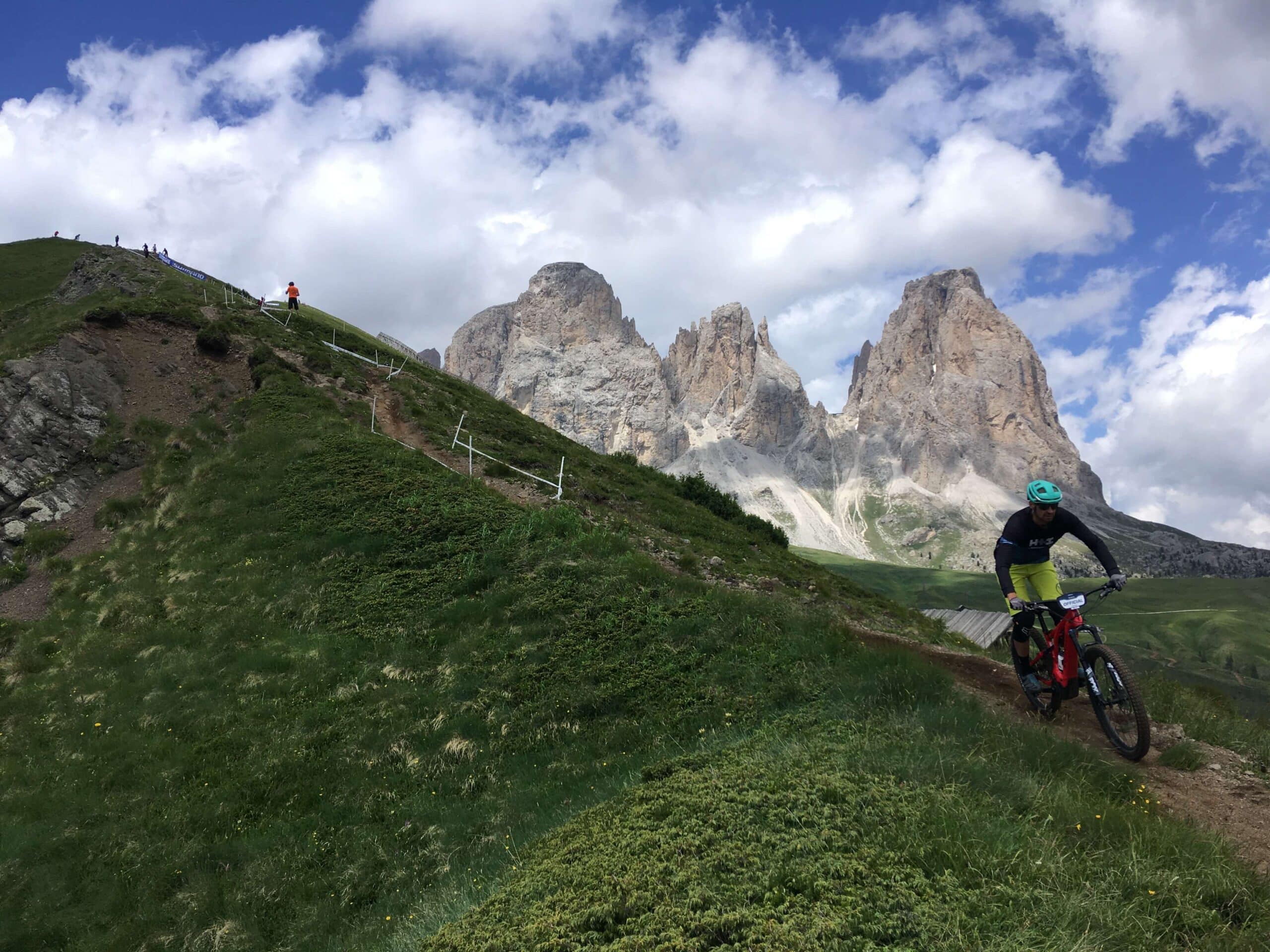 The previous 8 years of racing professionally, I predominantly raced XCO. My main goals and focus were the World Cups, which limited the time for other non XCO races. However, when I did get a chance to do a Stage race or an Enduro, I took it.

The Enduro races helped take the pressure off myself and gave me a break from the XCO racing bubble. After experiencing some local Enduro races in Europe, a bucket list event I have been wanting to do with my Husband, Heiko, was an Enduro World Series (EWS) race. Now that I have stopped racing at a World Cup level, I finally got the opportunity to tick not only one but two EWS races!

The ones we chose were Petzen/Jamnica and Val di Fassa. I could not have asked for a better experience…the camaraderie, trails, and scenery are awesome! There is so much more to the experience than results and time gaps. Even though we only did the EWS100, we still got to push our bikes and bodies to the limits, finishing the race feeling more confident and motivated for more.

A little insight into Enduro MTB if you’re not familiar; you race over a series of timed downhill stages where the transfers are mandatory but not timed, the finishing times of each stage are added up to give an overall time which determines the positions of the riders in each category. You could say the EWS for enduro racing is equivalent to the standard of World Cup DH and XCO for their respective disciplines.

What sets it apart is that you do not have to be in the top ranking of the world to experience it. However, you still need to qualify to compete in the pro category races. If this is not possible you can enter for the EWS100 (which we did). The concept of the EWS100 is, ‘race 100% of the EWS course on the EWS weekend, with slightly relaxed rules but all the physical and technical challenges and all the racing’. It is not quite true since we only do 4 out of the 5 stages.

Regardless of one less stage, The EWS100 lets you race on the same track as the pros the day before they race and you get to support and watch them the next day. The speeds that they ride at are next level!

We had a challenging time leading up to the events and I started feeling out of my depth, but I am so glad we went ahead with racing. My nerves settled a bit after the first training stage down the Thriller Stage in Petzen (Austria).

Even though I was slow, I was happy and motivated that I could ride everything. It is true what they say that the stages will push your limits, but they are not unnecessarily dangerous. A heads up though, when it is wet and muddy the terrain can become sketchy and can unsettle the nerves again…this is evident in the video interview I did (below at 1:07). My smile and confidence where back again later when conditions improved, and we had the breathtaking views of the dolomites!

“After the rock garden, take the inside line, then make sure you are in the right gear to pedal up the short climb which then goes into this gnarly rooty section and finishes off with a few tight twisty turns”. With the diversity of each stage, it is difficult to remember all the lines, especially when you only get one run per stage to practice.

For the next enduro, I might take a tip from the pros and use a POV camera to film practice. Especially given that I got distracted a lot by the scenery and making new friends. Saying that, even with a POV camera, it will be challenging to remember stages like the Thriller in Petzen, which is over 6km long with 1088m of descending! In the end I just tried to be in the moment and soak up the whole experience.

Going into the races knowing my strengths were climbing, I really tried to capitalize on those sections. The irony in that being it was the only section where I had someone pass me! Heiko did not let me live this down the whole event, despite how many times I tried to redeem myself!

Maybe it was a good thing I was not going that fast because when I did go too hard on the climbs, I felt spent going into the descents. The key is to pace yourself and hope you can still hold onto the handlebars at the end. I felt like I nailed this going down the Queen stage, “Tutti Frutti”, in Val di Fassa – a 6.23km trail with 960m of descending with plenty of pedalling sections mixed in.

For me the longer stages were all about survival and the shorter stages were going as hard as I could because, how tiring can a 2km long downhill be??? It turns out damn hard BUT it is so rewarding. The pedaling transfer stages with some assistance by the gondolas/chairlifts gave plenty of time to recover for the next stage. Maybe I went a little faster up the climbs than need be but I was having so much fun though and needed to up my fitness since I signed up to race the MAXXIS BIKE Transalp the following weekend…which is a story for another time.

Something I did notice is that the level of women’s racing at the EWS is very exciting. In the EWS100 we had a great vibe and healthy competition amongst the ladies. Everyone is also encouraging which is awesome, sharing experiences and tips on how we can go faster.

I was reminded to believe in myself more when a friend made me start in front of her going down the incredibly long Tutti Frutti Stage in Val di Fassa. I really thought she was going to catch me since we only had a 30 second gap, but she did not think so. She was right! I managed to cross the line just before she came in. A little bit of pressure and motivation was all I needed. Still way behind the pro ladies but that doesn’t bother me because I was having a blast pushing my own limits.

The incredible experience of taking on 2 Enduro World Series events left me with some thoughts I’d love to share. Maybe you’d make the trip some day to ride one of these events!