All The Wet Weather Action from MTB World Cup Les Gets 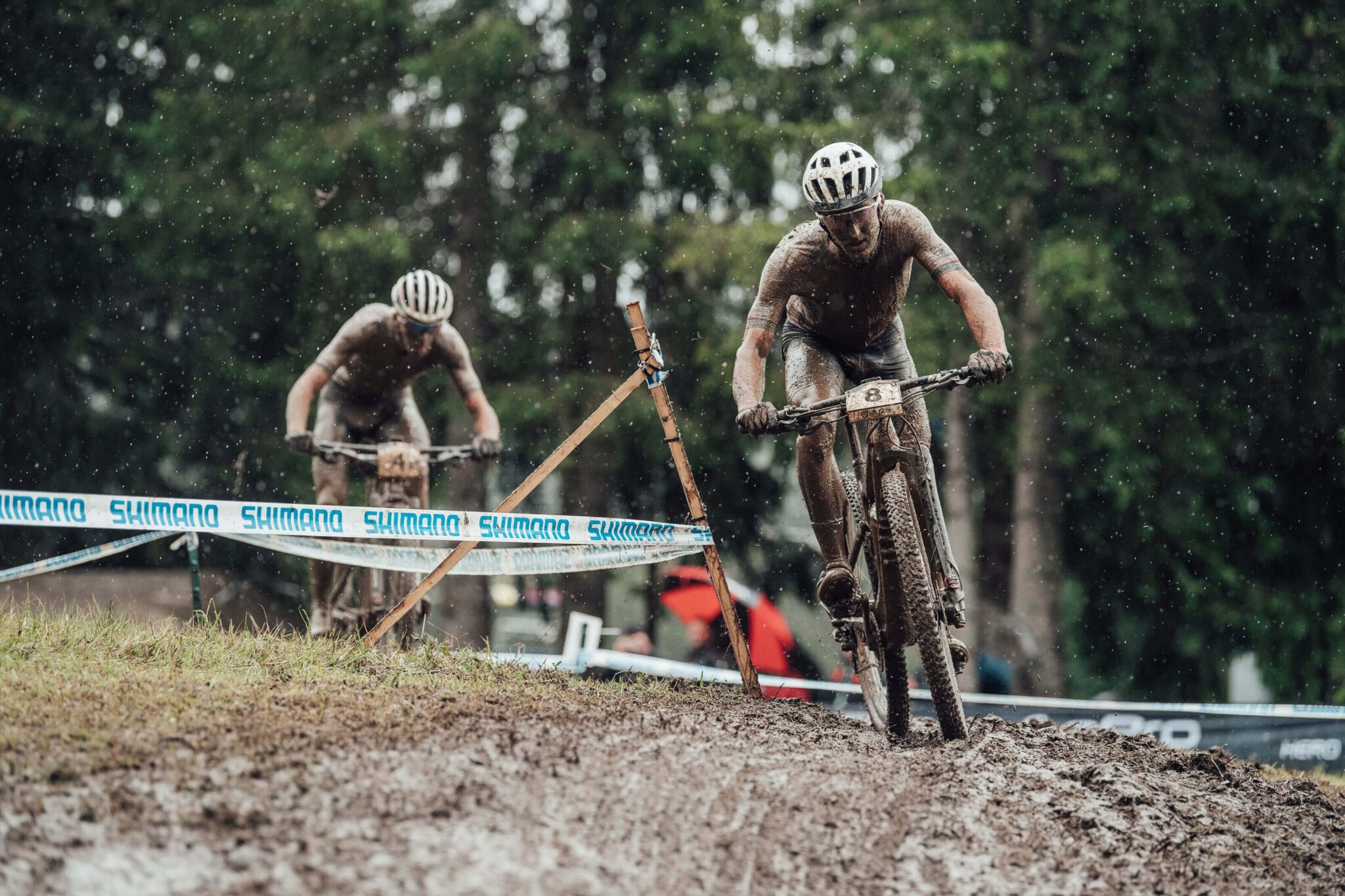 The UCI MTB World Cup in Les Gets France was heavily seasoned with wet weather! The Short Track Cross Country (XCC) on Friday was the only event to not have rain spicing things up. It was special to see lots of fans lining the sides of the course as the world somewhat returns to normal in France. Let’s take a look back at the highlights of the weekend.

The Cross Country riders would open the weekend’s racing as usual with the short track. 9 laps for the women and 10 laps for the men on a 1 km course with 43m of elevation gain. Loana Lecomte and Mathias Flueckiger were the fastest seeded riders as they were the current series leaders and Alan Hatherly was also a front row seeding. The XCC race is a chance to earn series points for the riders as well as decide their seeding position for Sunday’s XCO race.

Intensity is full on from the start in such a short race. In the women’s event Jenny Rissveds was strong off the start and continued to be so throughout the race. Pauline Ferrand Prevot and Loana Lecomte would be with her leading the first few laps. Kate Courtney worked her way up into 5th from the second row and Linda Indergand sat in 4th, where she would eventually finish. Sina Frei got in the mix as Lecomte dropped back in the top 10.

Rissveds, Ferrand Prevot and Frei lead into the 9th lap with Rissveds appearing in control, but it would be Pauline Ferrand Prevot who would attack and break away to take the win. South African Mariske Strauss crossed the line in 19th with a time of 21:04 after working her way up from 34th in a high paced race!

The speed of the men’s race is absurd and it was Anton Cooper leading them out on the first laps. Shurter, Sarrou, Hatherly, and Carstensen were on his heels along with the rest of the field. Flueckiger moved up to the front and took control of the pace, spreading out the field. Ondrej Cink got into the lead during the middle of the race and shots were being fired left right and centre. In the relentless pace and intensity, Hatherly continued to sit around 5th position, looking strong.

Flueckiger mashed the gas pedal to the floor on lap 9 and broke off of the front of the race to take the win over Sarrou and Cink. Hatherly crossed the line 5th, just 5 seconds back from Flueckiger.

The downhill racers had been frothing over the new Les Gets track all week! Plenty of widely taped fresh sections of track in the woods made for creative line choices and opportunities to make big gains with masterful bike handling! Have a look at some of the action below.

The rain started to come down during the elite women’s finals making the root covered off-cambers all the more difficult to keep tidy.

Myriam Nicole had qualified with the fastest time, being the only women to hit the deadly road gap-to-berm and thus making up a lot of time at the top of the course. She would face the worst conditions of all the women on race day though. Tahnee Seagrave struggled a bit in qualifying and would be 7th to final rider going down on Saturday. She found her groove and put down a very tidy run but lost a lot of time in the final segment of track, though it was enough to take the hot seat from Mille Johnset.

World Champ Camille Balanche would struggle to find pace at the top but clawed back 5 seconds towards the bottom of the track. It wasn’t enough and she went in 4.9 seconds off of Tahnee and half a second ahead of Johnset. It all rested on Nicole to beat Seagrave and she was looking very good at the top of the track, aside from a brief slide out costing her precious seconds. She attacked all the way to the line and would finish 0.252 seconds behind Seagrave! A great victory for Tahnee after many years of battling injuries and now finding her rhythm again.

The men would face the worst of the rain and the conditions would continue to deteriorate throughout the day.

Youngster Max Hartenstern put down a great time early on in the field and one by one the fastest qualifiers would do their best to topple it while facing facing ever depreciating track conditions. Baptsite Pierron and Connor Fearon would each come within 0.2 seconds but not be able to better Max’s time. The run of the day (in competition with Reece Wilson) would go to Thibaut Daprela, the 20 year old French rider who had spent the week eating through a straw after a massive crash at a French Cup race. He came down in far less than favourable conditions but held the fastest splits from sector 3 to the finish and crossed the line with a huge winning margin of 2.4 seconds over Hartenstern!

Greg Minnaar was impressively clean amidst the chaos of the wet track and finished in 7th with most of his series contenders dropping out of the top 20. Reece Wilson was on a wild run in horrendous track conditions and though not looking good for a win, was seriously impressive to witness. He took a huge slam off of a jump close to the finish and thankfully got up to roll across the line in one piece.

The crescendo of the weekend. The XCO finals. A well saturated 3.5km track with 140m of elevation. Plenty of technical man made features as well as natural ones. A swarm of high powered racers and only 2 winners.

The women took to the course for 6 laps at midday. Loana Lecomte the favourite this season having already won the first 3 rounds. But Pauline Ferrand Prevot definitely looking potent in the XCC. The highly technical track conditions would make for very spicy racing!

Lecomte started making ground on lap 2 and would battle it out shoulder to shoulder with fellow French rider Pauline Ferrand Prevot. There was a strong slip and slide theme to the racing which had a big part to play in the results. Swedish ride Jenny Rissveds took a horrible looking tumble off of a wooden feature on lap 2 but recovered from that to take 2nd overall! Ferrand Prevot also went down on lap 2 on one of the muddy grass corners and Lecomte took the race by the horns from there, charging on alone for the remaining 4 laps to win the race.

Young gun Evie Richars of Great Britain rounded out the podium. There are lots of talented young riders in the women’s field, most notably 20 year old Lecomte who now took her 4th win of the season with a time of 1:27:23. 51 seconds back was Rissveds and another 20 seconds to Evie Richards. Mariske Strauss would finish in 27th with a time of 1:36:26.

When it came time for the men to race their 7 laps, it seemed it would be Mathias Fluekicger versus the rest of the field. Coming strong off of the XCC win and 1st place in Leogang at the previous round, the Swiss rider would lay down the law in Les Gets as well.

With riders like Nino Schurter not featuring where they usually would in the results, there is a lot of talk about riders saving their bodies to peak at the Olympics later this year. As a results of the volatile alpine weather creating a mud bath on track, we actually saw riders deciding it was more efficient to carry their bikes at certain technical sections.

Alan Hatherly got off to very strong start with Jordan Sarrou and Ondrej Cink chasing Mathias Fluekicger! Cink was the strongest chaser and pulled away from Sarou and Hatherly. Sarou would drop the hammer on the penultimate lap, putting Hatherly in the hurt box but Alan dug deep and held onto 4th position!

Flueckiger crossed the line with a time of 1:27:33 with a 25 second winning margin to Cink. 10 sections back from Cink was Sarrou with Hatherly just off of his wheel.

For the full results from all the races, CLICK HERE.

For the full replays on Red Bull TV, CLICK HERE.

Another MTB World Cup in the bag, providing a weekend’s worth of thrilling racing for us! The next round of Downhill is set to be Maribor, Slovenia on the 14th and 15th of August and the next XCO on the 4th and 5th of September in Lenzerhiede, Switzerland.

You know where to come when the action goes down!