Are You Ready for EWS Val Di Fassa in Canazei, Italy? 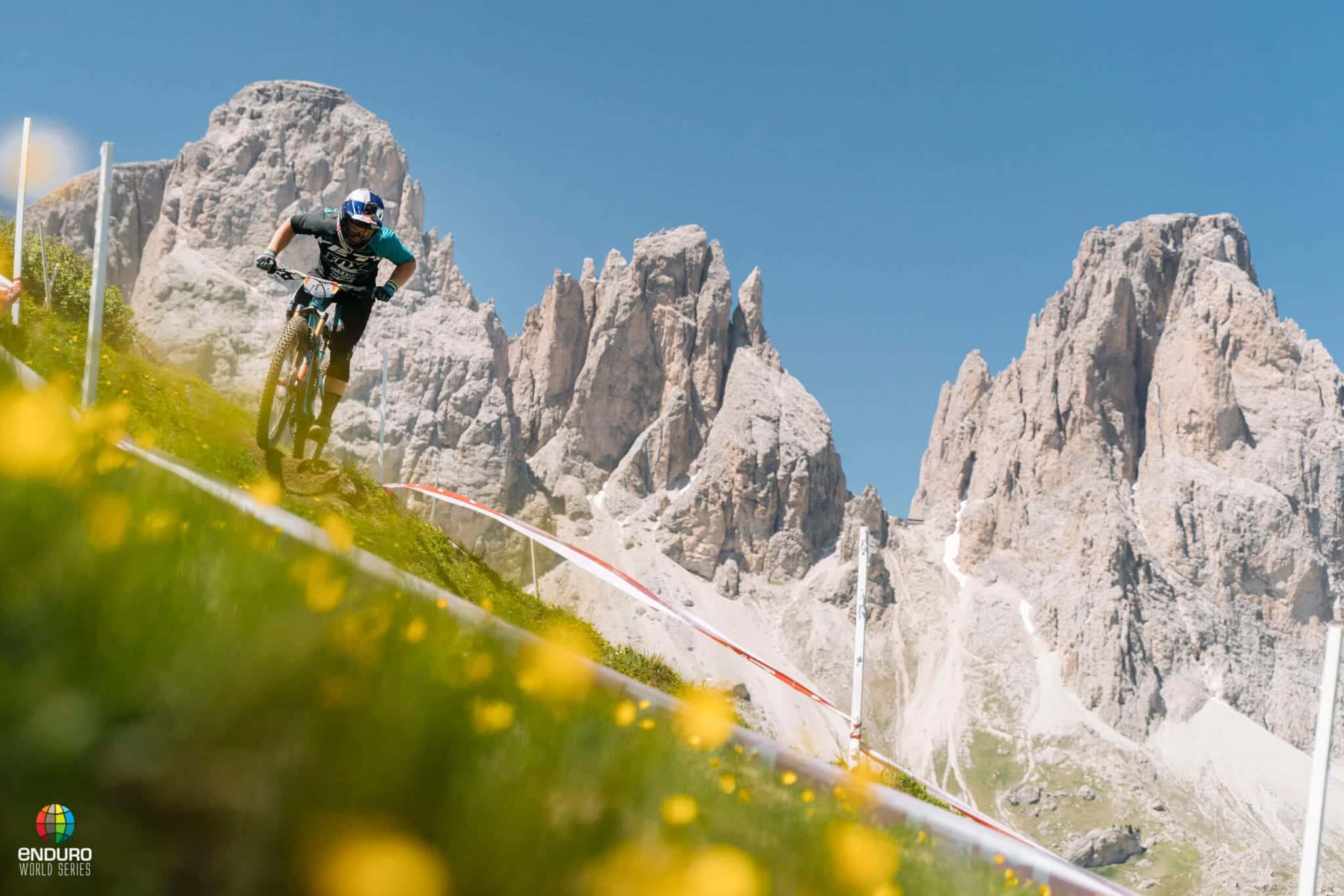 Boy are we excited for the 2021 Enduro World Series season! It kicks off this week with a double header in Canazei, Italy. Spectacular scenery and tough racing awaits! Have a listen to our pre-race podcast or give the article below a read.

The Val Di Fassa EWS in gorgeous Canazei had its debut in 2019 and this will be its second feature on the World Series. The stages were characterised by their highly technical corners and intense physicality. The Italian race organisers are not shy of a punchy climb or 2 during a Stage and the weekend’s Pro Stage is over 6km long and will be raced 3 times this week! More on that below.

The 2021 Enduro World Series will be made up of 6 stops, of which 3 are double header race weeks such as this week’s event. That will mean a mid-week race for the pros that will then be repeated on the weekend.

The Enduro racing format, if you are unfamiliar, is made up of a big day pedalling your bike around a set course but with only special downhill segments of the course called “Stages” being timed. Total race time of all the Stages are added up and the rider with the fastest time wins. A test of endurance, technical skill, equipment management, fitness, and reading trails at speed. Riders will get to practice each Stage once before racing it but the length of the Stages makes it impossible to learn every detail like at a downhill race. Here is a look back at the 2019 Val Di Fassa EWS event.

As mentioned, there are two races this week. Wednesday will be Round 1 of the season, a single day event comprised of 4 Stages, one of them being a Queen Stage (see below).

Round 2 of the year will commence on Friday with the first Pro Stage of the year (see below) and then a repeat of the 4 stages from the Round 1 course on Saturday.

The Pro Stage: A single Stage that will be raced the day before the main race. The Pro Stage will count towards the overall race time as well as offer Overall Series points for the top 5 Stage finishers. In this week’s case, the pro stage will be repeated as Stage 4 in the main race.

The Queen Stage: One stage per event will be designated the “Queen Stage”. Top 5 finishers on the Queen Stage will receive bonus points for the overall Series rankings.

That is a beefy looking course!

3 race laps on Tutti Frutti over the week is going to take its toll on the riders! Being the Queen Stage as well, riders will be hammering out full gas every time their tires hit the dirt on that Stage. The flow doesn’t come easy on these Stages, you have to work for it! As much as there is a lot of chair lift assistance, the racers will pay for it on the descents. 3370m of descending at Round 2 and 2390m at Round 1 will be incredibly demanding on the riders. Speaking of, who are we looking out for at the first rounds of the 2021 Season?

In the men’s race, it will be all to play for! Favourites are the 3 X Overall Series champion Sam Hill returning for the first time since 2019, the 2019 Val Di Fassa EWS champion and powerhouse Richie Rude, and Jesse Melamed who crashed out here in 2019 but was blindingly fast and dominant in 2020.

There are also riders such as Jack Moir to look out for, relatively new to Enduro but he’s never been outside the top 10 and will surely have to take a win sooner or later. Martin Maes, Florian Nicolai, Ed Masters, Dimitri Tordo, Adrien Dailly, and Marcello Pesenti (local hero in the top 5 2019) can’t be counted out either though!

3 young guns to keep an eye on are Kasper Wooley (who took Richie Rude to the line and won at a local Enduro last year), Antione Vidal who’s u21 times were stacking up to top 10 men in 2019, and Louis Jeandel.

In the women’s field there is the reigning champ and Queen of consistency, Isabeau Courdurier, who will be hard to beat this weekend!

2 French compatriots of her’s, Morgane Charre and Melanie Pugin, won rounds in the 2020 short series and will not let Isabeau off the hook easy this week!

Andreane Lanthier Nadeau (ALN) stood on the second podium spot here in 2019 and won a Stage off of Isabeau. This could be the fire in her belly that she needs to claim a EWS win!

Ella Conolly and Harriet Harnden are the youngsters to look out for, Ella having already proved her podium potential in the elites.

Katy Winton, Noga Korem, Raphaela Richter, and anyone with a French flag next to their name will likely be fast this week and we expect some surprises as usual!

We feel spoiled with 2 rounds of EWS racing to watch this week and we are sure to be on the edge of our seats!