Cape Epic Stage 3: Speed Company Live Up To Their Name! 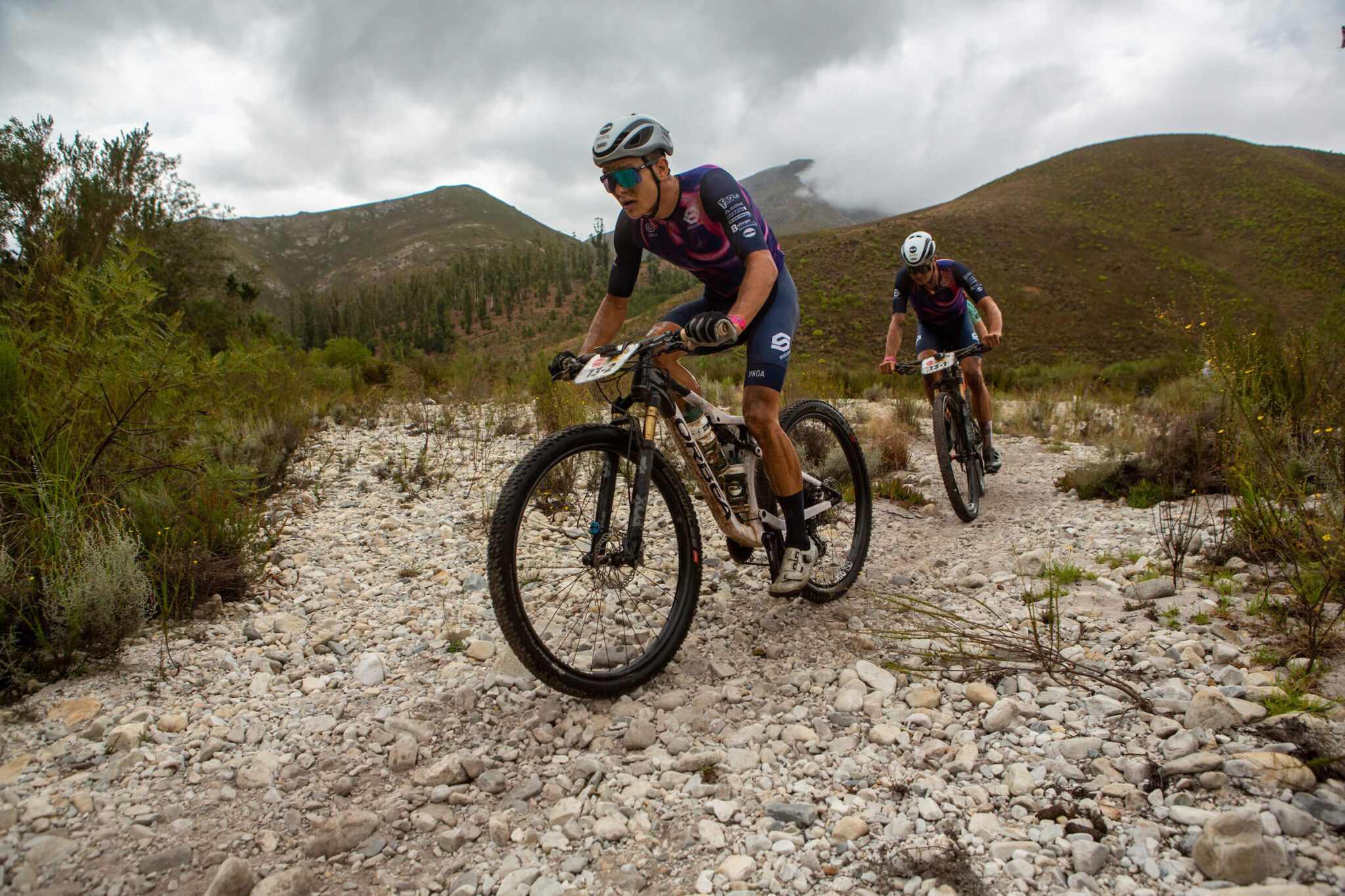 Defending champion Matt Beers (Toyota-NinetyOne-Specialized) started Stage 3 of the Absa Cape Epic with an explosion of high-octane mountain biking. With riders still getting into their pedal stroke in the start chute, Beers revved away from the pack, dragging a few startled teams along for the ride.

It was a short-lived display of power, but it set the tone for the stage when Lukas Baum and Georg Egger (Speed Company Racing) took up the challenge laid down by Beers. Baum and Egger moved to the front of the race before the 20km mark and never looked back, ultimately winning the stage two minutes ahead of Beers and Christopher Blevins. Their scorched-earth ride also took them into second place on the general classification.

Race leaders Andreas Seewald and Martin Stošek (Canyon Northwave MTB) finished third on the stage, a further minute behind Beers and Blevins. They retain the yellow Ciovita leader jerseys for Stage 4, but both Speed Company Racing and Toyota-NinetyOne-Specialized have chipped away at their overall lead.

The racing on Stage 3 was dominated by Speed Company Racing’s intensity. Santa Cruz (Maxime Marotte and Keegan Swenson) and Imbuko {Type} DEV (Pieter du Toit and Marco Joubert) put on a good show in the early stages, but as the race wore on and the pace increased, the chasing teams appeared to run out of puff.

Nino Schurter (SCOTT-SRAM) also gave chase early on, but his partner Lars Forster seemed to be struggling. Schurter and Forster ended up finishing nine minutes behind the stage winners.
By the third water point, Speed Company Racing were out in front by themselves, two minutes ahead of the chasers. Their lead only grew over the next 40km with only Beers and Blevins giving chase (though at one point, a wild bunny did enter the fray, making a mad sprint between the wheels of the bunch).

Baum and Egger were thrilled with the win. “Today was the first day we both felt normal! Yesterday my stomach was giving me issues, and the day before it was Lukas. But today we both felt good. I don’t actually know what happened out there, we just went full gas from the start! I didn’t know much about the route, it was all about going flat-out today. I hurt a little at the end, but Lukas was so strong; he got us home in the end.”

Now second overall, Speed Company Racing has threatened a performance of this calibre all week. “Georg and I have been friends for over 10 years; we have raced together since under-15 level, so we know each other so well. I know when he’s feeling good, and I know when his legs are strong. We have a great understanding of each other’s abilities. We raced hard from the start today. At the last water point, we just filled up with a bit of Coke, and then it was full gas all the way to the end. It’s great to win the stage.”

Although their challengers are closing in, Canyon Northwave MTB was still happy with the third-place result and another day in yellow. “I got a flat through a field somewhere,” said Martin Stošek, “It was something a didn’t see; it was 2km to the tech zone so it wasn’t a major issue. We had to chase the group after that, but it was still a solid day and we are happy to keep yellow. Every day in yellow is nice, especially starting in yellow each morning!

Ominously for the rest of the field, Beers says he feels back to his best. “I felt a lot better today. The Speed Company Racing team was superb. But I am feeling back in business now and ready for racing.”

Stage 4 is another showcase of Greyton’s trails and the wider Overberg region. It’s short, punchy, and will be full of fireworks from the teams hunting down the yellow jersey.