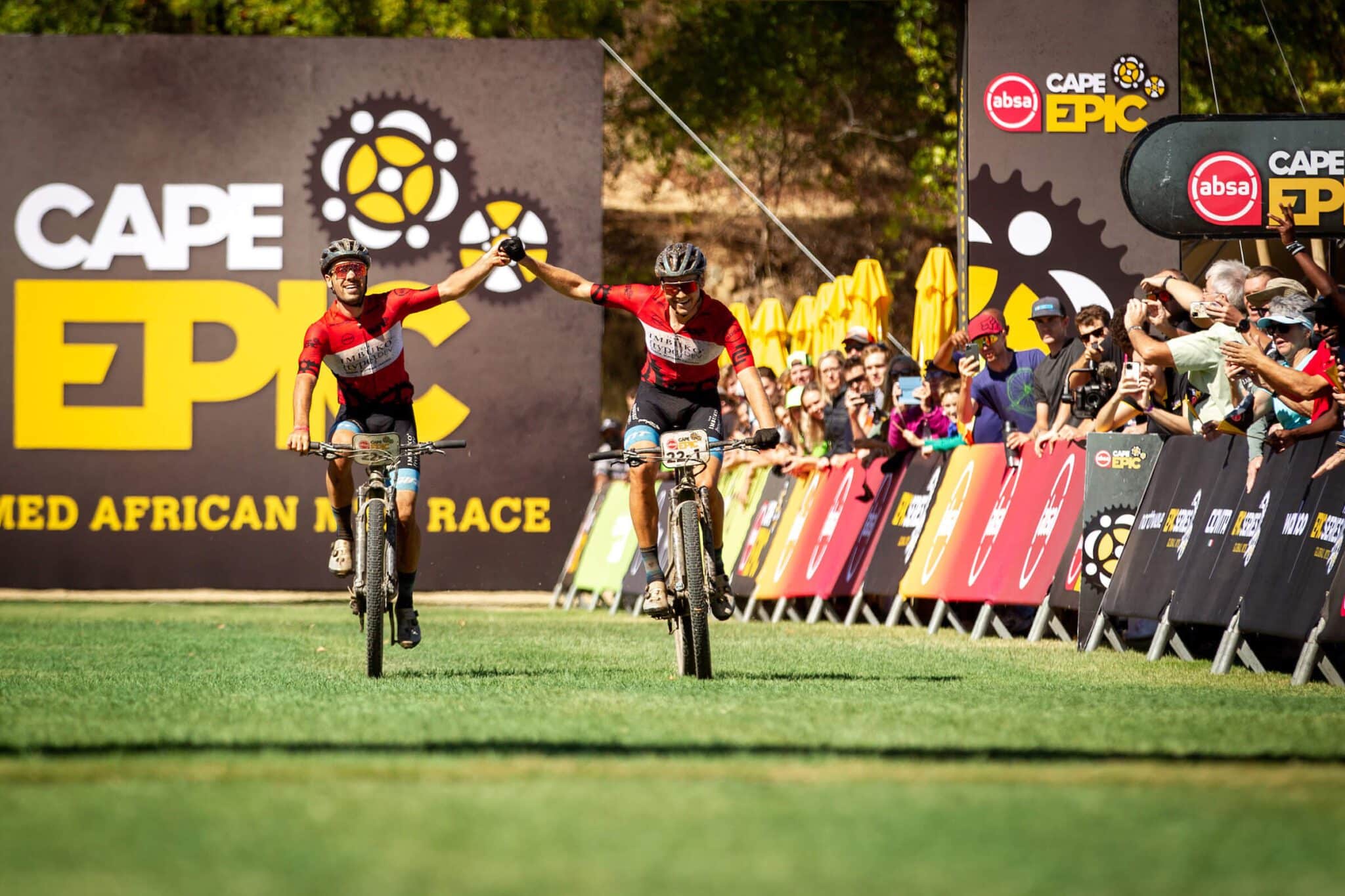 South Africa’s Marco Joubert and Pieter du Toit (Imbuko {Type} DEV) won the 115km Stage 5 of the Absa Cape Epic after a thrilling break 70km into the stage from Greyton to Stellenbosch. The South African riders, already wearing the Absa African Men’s jerseys as the leading African men’s team at the event, rode the last 45km of the stage alone upfront with the chasing pack unable to hunt them down. It was their first-ever stage win at the Absa Cape Epic.

“This is just a surreal feeling,” said Marco Joubert. “Halfway into the stage there were two climbs where I was nearly dropped, but I managed to hang in, and we pushed on. It’s unreal and totally unexpected. I’m so happy with that ride.”

Imbuko {Type} DEV made their move when a gap opened among the lead bunch after the third waterpoint. Pieter du Toit spotted the opportunity and roared ahead. “I said to Marco, ‘let’s go, let’s go’. After that, I was just on the rivet all the way to the finish. I was in the red for most of that ride, just chewing gels as much as I could.”

Joubert added that they had limited tactics towards the finish. “To be honest, we didn’t think too hard about strategy. It was just flat box from the minute we broke. We had some luck with tailwinds, but there were also hectic crosswinds and headwinds on parts; we just put heads down and hoped for the best!”

Earlier in the stage, the race exploded into life on the Rusty Gate climb out of the Elandskloof race village. As expected, Speed Company Racing went hell for leather from the get-go. They dropped off shortly after the climb but then darted back into the front on the first descent.

From there, they yo-yoed to the front and the back of the lead pack; before dropping back for a final time around 75km in the stage, thus allowing a lead bunch of Canyon Northwave MTB, Imbuko {Type} DEV, Bulls, Toyota-NinetyOne-Specialized, Wilier-Pirelli, and Wilier 7C Force 1 to form. Imbuko {Type} DEV then made their break for glory shortly after the 69km checkpoint.

After Joubert and Du Toit made their stage-defining move, Canyon Northwave MTB and Toyota-NinetyOne-Specialized worked well together to ride as a four-man chasing pack. They decided against chasing too hard, focusing instead on putting more time on Speed Company Racing.

“The plan was to keep Speed Company Racing in check today,” said yellow jersey wearer Andreas Seewald. “But they were taking lots of risks and they managed to get away. We had to work hard to catch them, and it was stressing us out a bit. After a while, everyone was back together, and their attacking was neutralised. We rode well towards the end and we’re happy to take second and put some more time on the other teams in the general classification.”

Matt Beers, now second in the general classification with partner Christoper Blevins, was happy with another solid ride but clearly delighted for a South African team to win the stage. After rolling over the finish line he rode straight across to Joubert and Du Toit to congratulate them. “That was a good ride. I’m happy for the boys. It’s important that South African riders win stages of the Absa Cape Epic.”

Saturday’s Stage 6 is a Stellenbosch trail day, where riders will tackle Banhoek, Idas Valley, and Jonkershoek trails. Passing opportunities will be limited, so tactics will be key on the penultimate stage of the 2022 Absa Cape Epic.

Tune in to the Live Broadcast from 08:30 on cape-epic.com and on Supersport.