Gravel Bikes vs Mountain Bikes | Which Is Better? 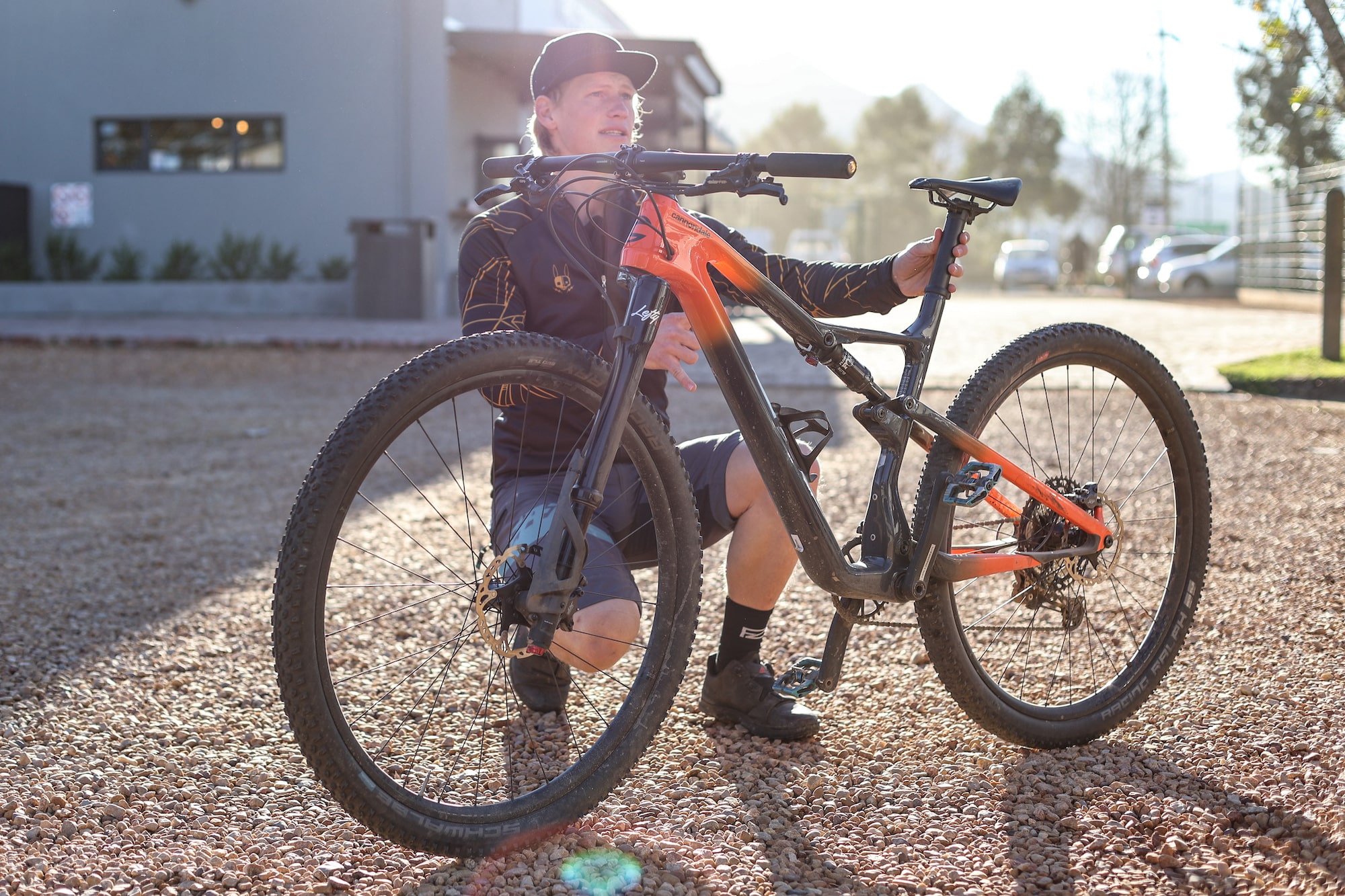 In the ever evolving sport of mountain biking we are seeing a new niche really solidify itself in the mainstream, gravel cycling. While cycling on gravel has been around since the 70s (it was the first form of “mountain biking”), as mountain bikes became more capable off-road the focus turned from gravel riding to more exciting disciplines such as XCO and Downhill.

But things change and recent years have seen a fleet of specialist bicycles emerging from the factories designed to be as efficient as possible at munching miles and miles of gravel, be it for competition or for touring purposes. These gravel bikes have evolved to the point of having engineered compliance in their frames and now even short travel suspension systems!

Are gravel bikes becoming just like the first full suspension mountain bikes? We think not. Which is better then? Well that will depend on the context in which you intend to use it and with that question in mind, let’s take a look at the differences between a gravel bike and mountain bike across their versatility and efficiency to determine which is indeed best. We will assume the mountain bike in question is a modern full suspension marathon / XC bike such as the Cannondale Scalpel that I rode on the 740+ km Cross Cape route.

Starting with carrying capacity. Being able to mount cargo bags (such as panniers) to the frame has been one of the primary design objectives of modern gravel bikes. While you can find an assortment of custom frame bags for mountain bikes, such as those made by Pretoria based Bag Box, it will be tough to beat the carrying capacity of a gravel bike with frame mounting options for bags.

Now not all gravel riders are looking for cargo options so this could either be moot or a point in the favour of the grav bike. You can always make use of come cargo bib shorts for storing essential items, such as we did on our Cederberg gravel tour recently.

When it comes to versatility, your typical mountain bike tires are going to have a wider range of use than those of a gravel bike. The frame of a gravel bike will limit how wide you can go with tires and wider tires allow you to run less tire pressure for increased traction and reduced rolling distance on rough terrain.

This fact means that if you would like to enjoy riding across a variety of surfaces your mountain bike will likely be more versatile whereas a gravel bike will be the more efficient choice on tar and smooth gravel roads. Once things start getting rougher and more technical you will lose the efficiency of the gravel bike due to limited tire width options. The gravel bike is a refined specialist but the versatility of the mountain bike due to the range of tire options (even fitting a narrower gravel wheelset is possible) give it the win here.

While drivetrains are a component that can be swapped out and changed, this isn’t a very common thing to do. While most modern XC and Marathon bikes are specced with a 12 speed (roughly 10-50 tooth) cassette and a single chainring (typically 30, 32, or 34 tooth) as standard, gravel bikes have quite a lot of variance depending on the model. Some may have a very similar rear cassette (in the 11-40 tooth range) to that of a typical mountain bike though paired with a slightly larger front chainring for more top end speed.

Many gravel bikes are specced with the kind of double chainring system that was phased out of high end mountain bikes over the last decade. Having 2 chainrings up front (typically around the 30 and 46 tooth range) and a more compact 11 speed (11-34 tooth) cassette will give you a slightly larger gear range but, importantly, smaller steps between gears for increased pedalling efficiency such as you would find on a road bike.

Standard mountain bike drivetrains will take the cake when things get steep as the easiest gear on a gravel bike is pretty close to a 1:1 peddling ratio where a mountain bike with a 34 tooth chainring and 51 tooth in the cassette gives a 1:1.5 ratio, much better suited to steep climbs. If the terrain is more flat or gently undulating, you will find better pedalling ratios and top end speed on the gravel bike.

Efficiency is a finicky subject as it is dependent on many factors in its optimal state. While many gravel bikes will be capable performers on some easier singletracks and a bit of rugged off road riding, it is obvious to note that modern mountain bikes will have the edge on truly rough terrain as they have been designed to cruise through the world’s toughest XCO courses with ease. But show the bikes a smoothly graded gravel road or some tar and the gravel machine will leave the MTB in the dust.

The big question here is “where is the line”? When does the roughness become enough to turn efficiency in favour of the mountain bike? Is it when rocks and roots start to become part of the equation, or are some corrugations on a gravel road enough to champion the MTB? It is hard to say without some scientific testing but we also need to consider the effect on the rider. A well conditioned rider may be able to keep a gravel bike moving faster than a MTB over corrugations but if your body isn’t used to those vibrations you will fatigue faster and rapidly lose your system efficiency.

Having done several gravel tours now and being able to compare the performance of a gravel bike and mountain bike, the MTB is undoubtedly more comfortable over corrugations and definitely so on anything rougher than that – like some natural singletrack. I must say though, the feeling of gliding over smooth roads on the grav bike is a delightful sensation and over a day of rough and smooth gravel and even some light trails, I would personally pick the gravel bike for its efficiency on the smoother sections and the various hand positions afforded by the drop bars.

So we looked at the versatility of mountain bike versus gravel bike tires and the MTBs came away victorious but there is a little more to be said on efficiency. I noted that lower air pressures in a higher volume mountain bike tire afford better traction and reduced rolling resistance on rough terrain and this can’t be matched by the low volume gravel bike tires (which max out at 45mm or 1.8” while modern mountain bikes start at 2.25”).

On most gravel roads in reasonable conditions, a 30-45c gravel tire will be the optimal choice for volume over the MTB but what can also be noted is the weight difference. The best cross country tires for mountain bikes hover just under the 600 gram mark while gravel tires are in the 400-500 gram range due to being narrower. Pair that with a slightly lighter rim as well and you have a faster accelerating wheel that requires less effort to rotate.

Where you will notice the weight advantage of the gravel bike’s wheelset the most is in accelerations, climbing, and over a long endurance effort, and coming from a mountain biking background I can confirm that it is a pleasant experience!

With rotational mass discussed, let’s take a look at overall system weight. Gravel bikes will tend to be lighter than mountain bikes of a similar value. This is because their components (most notably the lack of suspension) are fewer, lighter, and less expensive. Though not as noticeable as rotational mass on the wheel, weight reductions in the frame and overall system are going to make the bike a better accelerator and climber.

The climbing situation can be nuanced as we spoke earlier about how mountain bikes have drivetrains better suited to steep climbs but if you’ve got the power to turn the pedals, the gravel bike’s light weight will require less of you on the climbs at an equivalent gear ratio. If you really want to nerd out on the effect of weight on a bike’s performance, read Seb Stott’s pinkbike article.

Always one to consider. As a rule of thumb, your gravel bike is going to be more affordable than a full suspension mountain bike. They are less complex in terms of suspension and componentry and thus cheaper to manufacture and spec. For this reason we had a carbon gravel bike sneak into our top 5 sub R45 000 mountain bikes among the aluminium MTBs.

A final point for the gravel bike there!

We assumed the premise of gravel bike versus modern full suspension mountain bike for the above discussion but there is still a group of people out there who love some hardtail action. How would things compare if we put the hardtail and gravel bike head to head?

Points in favour of the gravel bike would still be carrying capacity, lighter wheelsets and possibly still a lighter total weight (if the hardtail in question has a 100mm suspension fork). Drivetrain specs will still differ in the same way as discussed above making the MTB a better suited bike for steep climbs and the gravel bike at home on long open roads.

The hardtail mountain bike will be closer to the gravel bike of similar spec on price than the full suspension MTB and you still have the benefit of a more versatile tire selection and off-road ability. It really is a closer call here but the main takeaway is the same. If you’re a gravel purist, then the gravel makes the most sense. If you want mountain biking freedom in a slightly lighter and less forgiving package than the full sus MTB, hardtails are the weapon of choice!

It is a nuanced battle between the mountain bike and the gravel machine over versatility and efficiency and, as with most things, it is going to come down to the specific use case. Does a mountain bike work just fine as a gravel touring vehicle? Of course. Is the gravel bike the better specialist in this arena? Without a doubt.

If you aren’t drawn to great singletrack adventures and technical terrain but rather crave the open road and the feeling of effortlessly gliding over its surface, a gravel bike is the tool for the job. If you’re a rider who enjoys the odd weekend racking up some miles on the gravel road but is equally drawn to the steep climbs and technical trails of the mountains, a modern marathon / XC bike is going to serve you better as an all rounder.

Feeling inspired to get out and explore? Check out our gravel cycling content here!