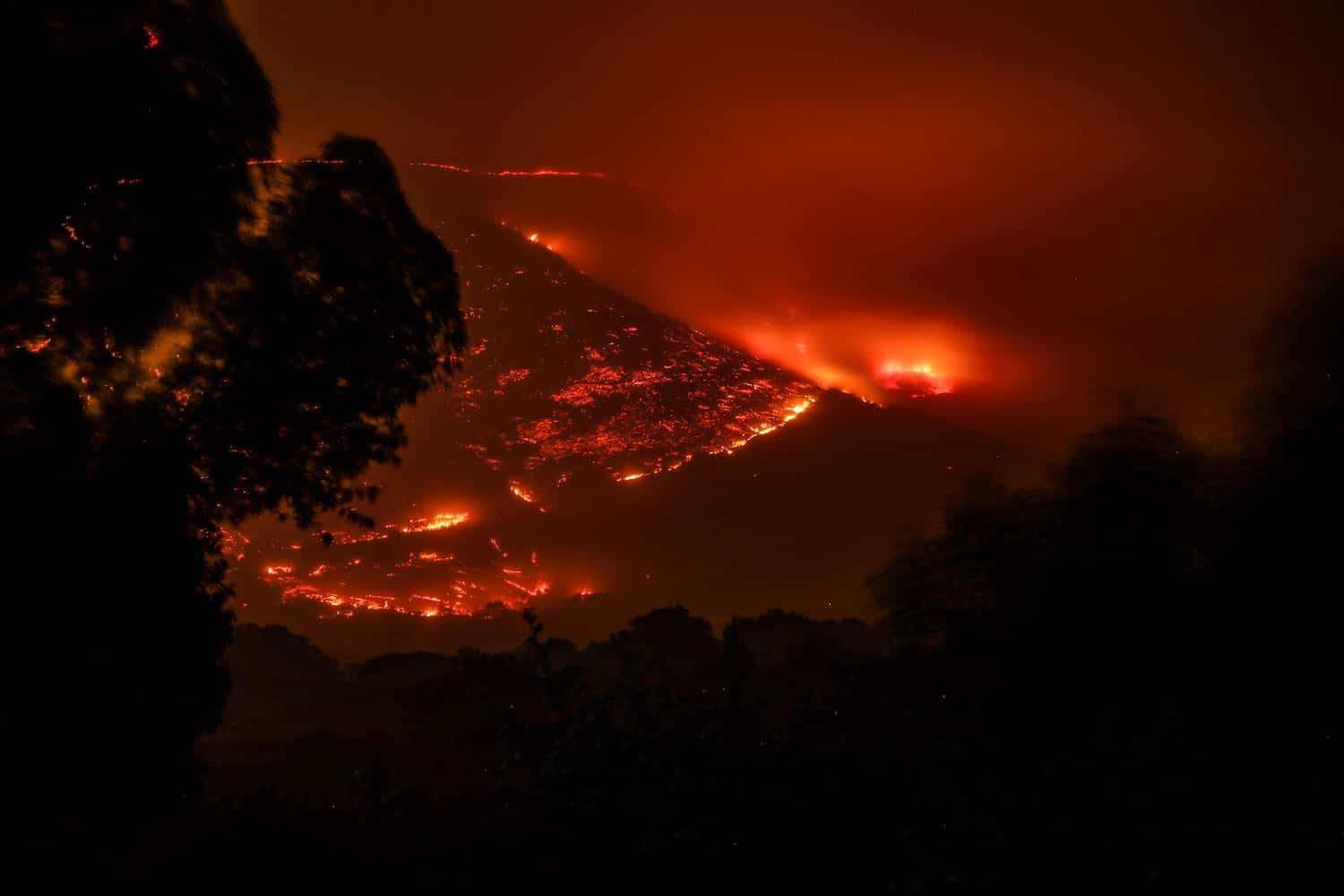 “Whilst the fire started sometime on Monday, close to the Theewaterskloof dam, it quickly spread over the high mountain tops to the Franschhoek valley, with smoke being visible on Tuesday. By Wednesday, the Jonkershoek valley had smoke hovering over it. Thursday was significantly worse. We then woke up on Friday with very little visibility and ash falling.”  (Photos by Max Sullivan)

“Throughout Friday the Fire spread up and over into the Jonkershoek Valley, by around 5pm we could see the flames, not far away, on the Coetzenburg side of the Valley across from where I stay. Within 30 minutes, due to the wind, the fire was rapidly racing towards Stellenbosch and down the Valley, the flames now spanned from close to the road at the bottom of the valley to the very top of the mountain. The fire was also burning up above the farm I stay on, thankfully quite high up, spreading across from Saaltjie.”

“On Friday there were 4 or 5 water bombing choppers on scene, doing rounds and filling up in the local dams nearby, predominantly the Stark Conde dam. It was incredible to witness how quickly and efficiently they were doing their rounds, one by one. The choppers seemed to make a big impact on the fire, however they left once the sun had set, which allowed the fire to gain momentum once again. By 10pm we had evacuated the house with what we could fit in our cars, I was one of the last to leave. I was snapping my last few pics in the darkness, from hundreds of meters away, but could still feel the warmth of the flames and hear the cracking of trees combusting. With the entire side of the mountain now engulfed with flames, the wind continued to pump in a South East direction towards Stellenbosch.”

“We returned the next day just before lunch, as the fire seemed to have passed by across the top of the farm. Shortly after 2pm, a fire flared up on the neighbouring farm, and we were directly in the firing line. At around 4pm fire crews from the Stellenbosch Fire department, Cape Winelands fire and the Volunteer Wildfire Services arrived at our house to safeguard the infrastructure on the farm. By then the fire was out of control, their objective was to protect buildings, not to stop the inferno. A mad rush then ensued as they assisted us to prepare for the worst. We began packing all outside furniture into the house, moving furniture away from the windows and opening the curtains (as the heat from the fire can cause them to combust through the glass). We then continued to clear vegetation from around the house, as well as water the house and surrounding plant life.”

“The crews gave us an ETA on the fire, we then moved our vehicles so that the fire trucks could park close to the house, and organised a safe/clear exit strategy. The crews managed to direct the blaze away, coming within 50m of our house, as the fire continued to burn across and down the valley, onto the neighbouring farms. In the process, two vehicles and some VWS crew members were almost cut off by the flames, they scrambled to get out and lost some equipment in the process. They did a phenomenal job in protecting our place, and many like it in the valley. A few of the VWS crew stayed on scene until around midnight, beating out smaller fires and monitoring the situation, before wandering off into the night, following the trail of small fires that the blaze had left in its wake.”

“This experience has really opened my eyes to the severity of these wild fires, and just how quickly they can spread out of control. The weekend was a mix of emotions, going from worrying about losing my favourite trails, to potentially losing everything I own and the place I call home.“

Max’s story is one of a lifetime! The fires looked insane and to come into such close contact with that raw energy is an incredible experience, one that hopefully not many of us will have to experience ourselves. There were over 200 firefighters involved in the battle from VWS, Stellenbosch and Cape Winelands.

We reached out to Robert Le Brun, Ecotourism Operations Manager for MTO trails Jonkershoek, to hear how the fire as affected our beloved Jonkershoek trails.

“As a result of the fire, the trails are pretty much all burnt, including all the plantations. I would say we have lost 80-90% of our bridges and 70% of our signage. We have the teams out there already and are looking to first restore the trails that can be restored the quickest, such as Fire Hut where teams are already working”

By the sounds of things Irish and Armaggedon will be the next trails to be tended to.

“The aim is open the trails one by one to get people back on them as soon as possible. The trails that have more woodwork, such as Red Phoenix, will take longest to restore. We are hoping to open at least one or two of the trails in the next 2 weeks. A full repertoire of all the open trails is going to take months in reality”. There have already been generous offers to help with the restoration of the trails.

The Jonkershoek Nature Reserve and the trails that call it home are very close to the hearts of many of Cape Town’s mountain bikes and mountain enthusiasts.

“We are looking at forms of funding and down the line will put together a way for people to fund and assist the work being done to restore the trails. We will be coordinating some dig days where people can assist with clearing the trails but right now there is still a lot of unstable soil, hot coals, and fire that would make it unsafe to do any of that too soon. We really appreciate everybody’s help and everybody’s willingness to help. I am excited to get the baby back up to it’s best!”

“At Specialized Bicycles, we love trails, we live trails, we all like to ride. It is devastating to see our local trail mecca, Jonkershoek, decimated by the recent fires. We would like to thank the firefighters and the many volunteers who fought this blaze over the past few days.

Specialized have been financially committed to supporting trail development for over a decade. Now in this time of need Specialized Stellenbosch will contribute ZAR 200,000 to Jonkershoek’s trails via retail sales at the store. Simply go to the store, purchase absolutely anything from a water bottle onwards, state that your purchase goes towards trail development and Specialized Stellenbosch will give the proceeds directly to the rehabilitation of Jonkershoek’s trails. It’s that simple

Our Managing Director, Bobby Behan has been volunteering on Jonkershoek’s trails since 2009, working closely with trail builder Bennet Nel and his team, as-well-as the MTO Group. This has been a labour of love for him. In his personal capacity, Bobby will support a further ZAR 100,000 in retail sales to be put towards Jonkershoek’s revival. Once again follow the same simple steps at the Specialized Stellenbosch Store.”

The support seen from the community is amazing! Most of the damage done to the trails seems to be unstable soil, wood features burning up, and debris on the trails themselves. They have been built well and thus have mostly not been too severely damaged. The teams will be out clearing and repairing.

When the trails are safe to ride again, the appropriate announcements will be made. For the time being, stay tuned to the WILD AIR and MTO Group social media channels to hear updates on the trail situation and how to get involved in restoring these gems!

Hopefully we get to put our tires on Jonkershoek dirt again soon!
Cheers from J-Dogg