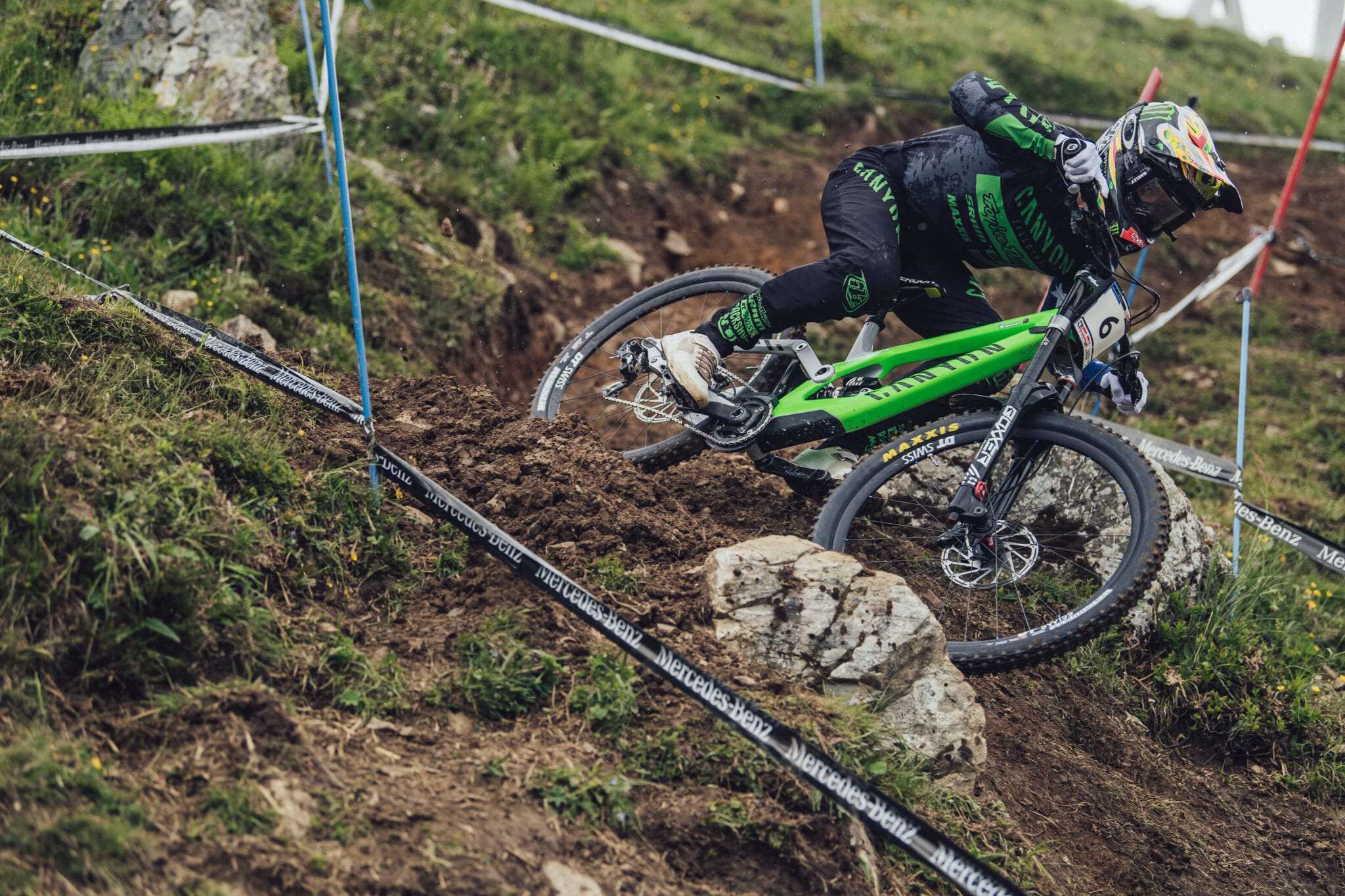 Now that was some racing! The steep slopes of Leogang in Austria served up a good show this weekend as the UCI XCO World Cup had its 3rd race of the season and the World Cup Downhill finally kicked off with round 1!

The racing started with the short track (XCC) on Friday evening where we saw first time wins for both Loana Lecomte and Mathias Flueckiger! 21 year old Lecomte is on a stormer this year, taking 3 consecutive victories in the XCO events. Alan Hatherly came across the line 6th around 30 seconds off the front bunch and once again the first Cannondale Factory rider to finish! See some Short Track highlights below!

Saturday was about gravity racing and the revised World Cup Downhill track was putting riders through their paces! With the wet weather making the wooded sections of the track incredibly testing for even the best riders in the world during qualifying (crash reel at bottom of page), the doors were blown wide open for who could take wins at the first round of the season.

Australian rider Troy Brosnan had the fastest qualifying time by 6.7 seconds and was certainly looking to be a favourite for the win, though young guns such as Thibaut Daprela were not going to make too easy for him! Vali Holl, local Austrian rider, was looking fast at her first Elite World Cup, qualifying 1st with a 2.2 second gap.

It wasn’t to be, unfortunately, for the young pinner as she crashed in the final corner (video at bottom of page) loosing her 2+ second split lead and conceding victory to World Champion Camille Balanche. Cami was looking composed and smooth down the whole track and it paid off with a fast clean run in challenging conditions.

Brosnan was off to a slow start in his race run losing almost 2 seconds to the blazing pace of Daprela. He then kept it clean and very fast in the muddy woods section, where Daprela had slipped up, to gain a 1.2 second advantage and his first World Cup win since 2017! Could this be the year we finally see Captain Consistent Troy Brosnan claim a World Cup overall?

4 Seconds back was Minnaar (only South African to qualify) in 12th position, with a mechanical issue and not the tidiest of runs. We hope to see him back at winning pace in Les Gets (3-4 July)! See the winning runs below!

Sunday was for suffering as the Cross Country Olympic format (XCO) finals would have the men and women grinding away for 90 minutes to decide their World Cup round 3 winners.

Loana Lecomte was on a powerful form as mentioned and took control of the race from the start gun. She posted the fastest time for each lap until tapping off the pace on lap 5 and crossing the line with a 1:48 time gap to second place Jenny Rissveds. Laura Stigger claimed 3rd.

In the men’s event, it would be Flueckiger and Cink who would battle it out for the 7 laps, exchanging blows as Anton Cooper sat close behind in 3rd. In the end these three remained dominant with Flueckiger leading Cink and Cooper bringing in 3rd.

Hatherly was looking on good form, riding with team mate Andreassen around 7th position. He suffered a snapped chain which resulted in 24th place finish. He still sits within the top 10 in the overall standings. Candice Lill took 45th in the women’s race and Redecker 61st.

Watch the full replays from all the events here.