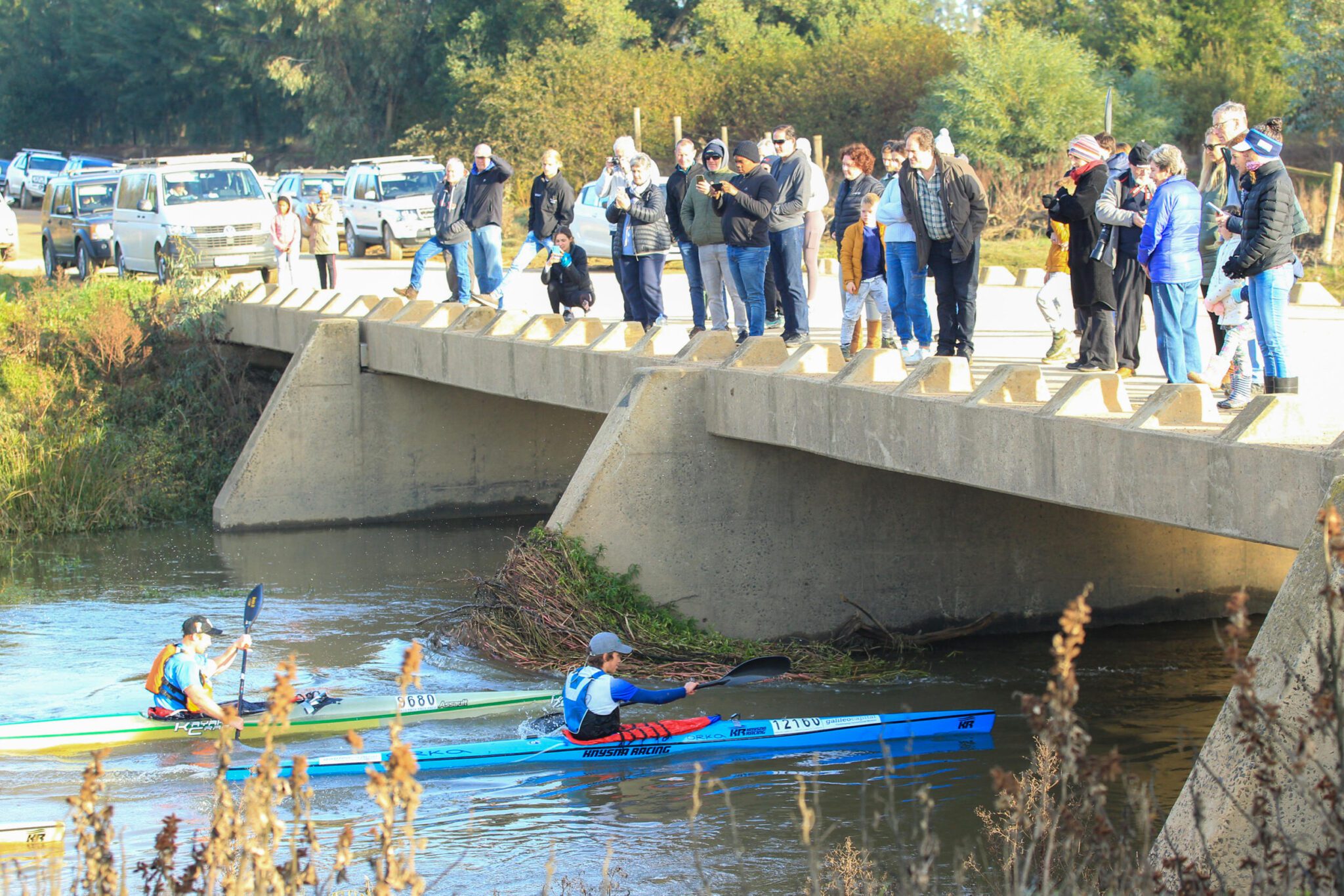 Paarl – Race leaders Hank McGregor and Jenna Nisbet both overcame drama on the technical second stage from Delsma and Bridgetown to retain their leads in the Berg River Canoe Marathon.

McGregor started with a slim lead over Under 23 Uli Hart, and they worked well together to keep chasers Simon van Gysen and Wayne Jacobs at bay, racing on a good river level on a second consecutive day of warm, windless mid winter weather conditions.

However the thick trees blocks that characterised the 48 kilometre stage to the headwaters of Misverstand dam allowed McGregor and Hart to get away at the front, with McGregor winning the Virgin Active bridge prize at Gouda.

However at Ysterpen the pair encountered a massive tree block and took very different lines to deal with it. While Hart struggled to get under the trees, McGregor ran to the bank to portage around the tree block, and once he returned to the river he did not know where Hart was.

“I took the chance and portaged and fell into the river because the bank was so steep,” said McGregor.

“After taking a swim I just started to chase because I thought I was about two minutes behind. On the long straights I timed it and I couldn’t see him.

“I was just hoping for the best, hoping that he was behind me. I only knew when I came across the line that I had won the stage.

The ever-consistent van Gysen raced much of the stage alone and consolidated his third place ahead of the determined Jacobs.

Jenna Nisbet started the women’s race with a three minute lead over defending champion Nikki Birkett, but needed to keep calm as she saw that lead erased in a moment of high drama at a tree block early on in the stage.

“When I got to the first tree block I did exactly what I shouldn’t have done and messed it up,” said Nisbet.

“I managed to follow Graeme Solomon and Robbie Herreveld, who caught me at the tree block, and I followed them for the next seven kilokmetres.

“Then I got stuck in a tree block and Nikki Birkett came past me running a portage on the side, and I panicked a bit,” said Nisbet.

“I had to stay calm and when I got to Gouda bridge I heard that she was two minutes behind. I was cautious in the section from Gouda to Train Bridge because I haven’t checked it out before, but after Train Bridge I knew where I was and had a good clean day from there,” said Nisbet.

“It was a really tough day because I wasn’t sure how to pace myself,” she added, delighted to learnt that her overnight lead had ballooned to over five and a half minutes.

The days biggest mover was the metronomic Heinrich Schloms who leapfrogged three placed up the leaderboard to eighth.

The signature third stage is the longest stage on the domestic racing calendar and spans 75 kilometres from Bridgetown to Zoutkloof, started in batches rather than elapsed time.