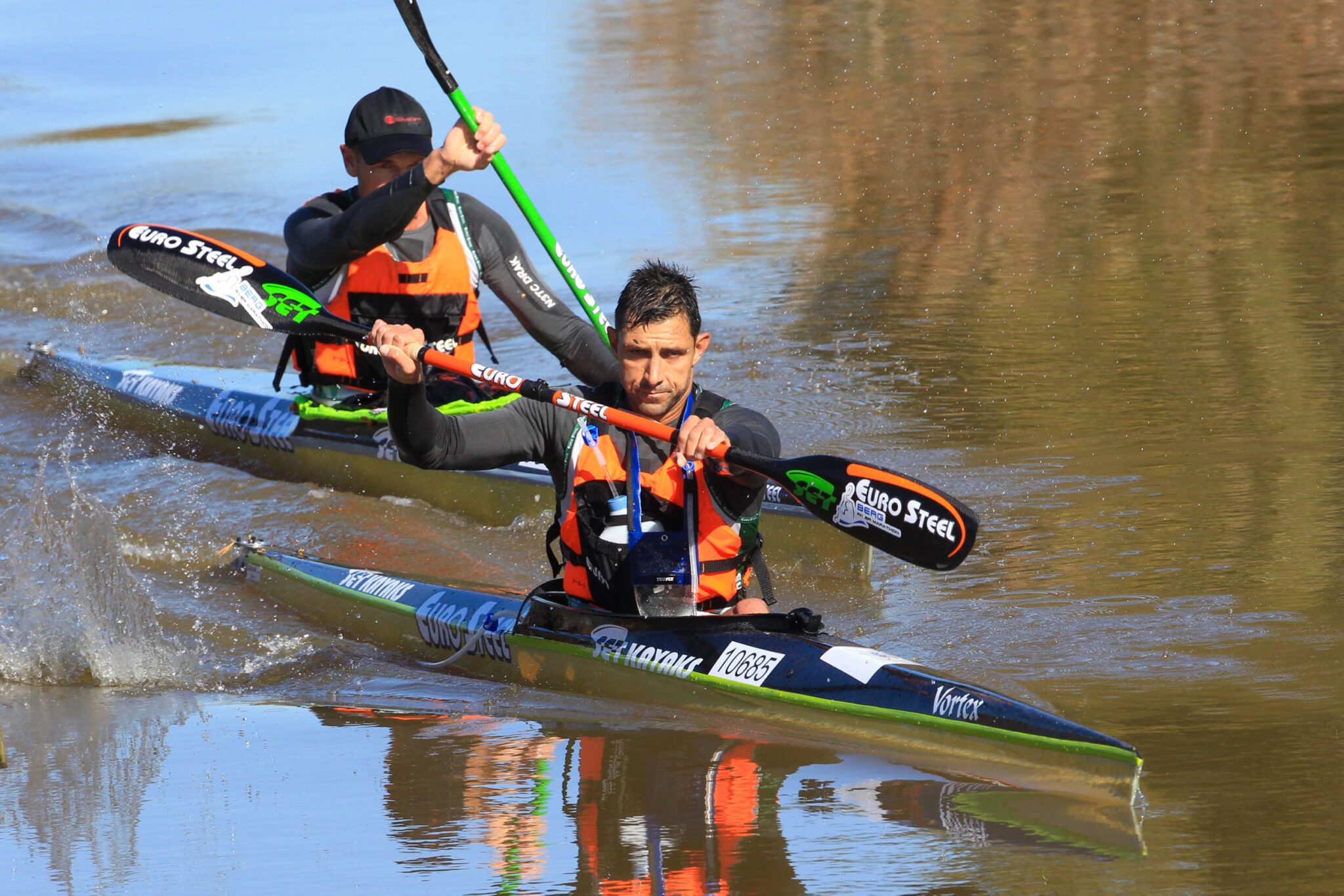 Velddrif – Hank McGregor gambled his race lead at the Berg River Marathon to help his friend Wayne Jacobs before completing a staggering comeback to safeguard his overnight lead in the 61st Berg River Canoe Marathon on Friday.

Starting the massed group start on Misverstand dam with a one and a half minute lead over the dogged Under 23 Uli Hart, McGregor put down his paddles and opted to wait for his friend Wayne Jacobs, who had fallen off the front bunch after taking a swim in a narrow channel on the river.

The enlarged front bunch of Hart and his brother Anders, Simon van Gysen, Graeme Solomon, Robbie Herreveld and Jeremy Maher  moved away at the front while McGregor erased his entire overnight lead waiting for Jacobs at Moravia bridge.

Jacobs had stormed back onto McGregor’s slip them work together ferociously to bridge back onto the front bunch and in a fitting end to a spectacular comeback Jacobs had the honour of taking the stage line honours.

“Just after the dam wall I managed to get swept under a tree, and before I knew it I was a foot under, wondering what’s going on with your race,” said Jacobs.

“We had big plans today to try and pull some positions and time, and then all of a sudden to start to feel that a top ten is slipping away from you.

“I tried to stay as calm as possible and just out my head down, believing that my partner Hank was slowing down the pace on the front bunch” he added.

McGregor said he was happy to forego his race lead because he backed himself to get back onto the front bunch,

“I’ve got faith in myself,” he said. “It’s not the first time that I have been put in a position like that and I will come back,” said the eleven-times Berg champion.

Jacobs still remains three and a half minutes behind third-placed Simon van Gysen, with the demanding 60km final stage from Zoutkloof to Velddrif to come on Saturday.

McGregor took the AQRate hotspot at the Misverstand dam wall portage while Hart picked up his first  hot spot at the Berg River Breweries hotspot at Moravia.

In the women’s race Jenna Nisbet showed she has plenty of energy reserves for the closing stages of the race with a masterful stage that allowed her to extend her race lead over Nikki Birkett to 21 minutes.

“At the big tree block at about thirty kilometres I took a bit long to get through it so I had twenty five kays to the end on my own,” she said.

Melanie van Niekerk remains in third, with Tracey Oellerman climbing one place to fourth ahead of Christy Shrimpton.

The race concludes with the 60km final stage into the Carinus bridge finish at Veldddrif, with another mild day forecast before an afternoon frontal system makes landfall on the West Coast port town.