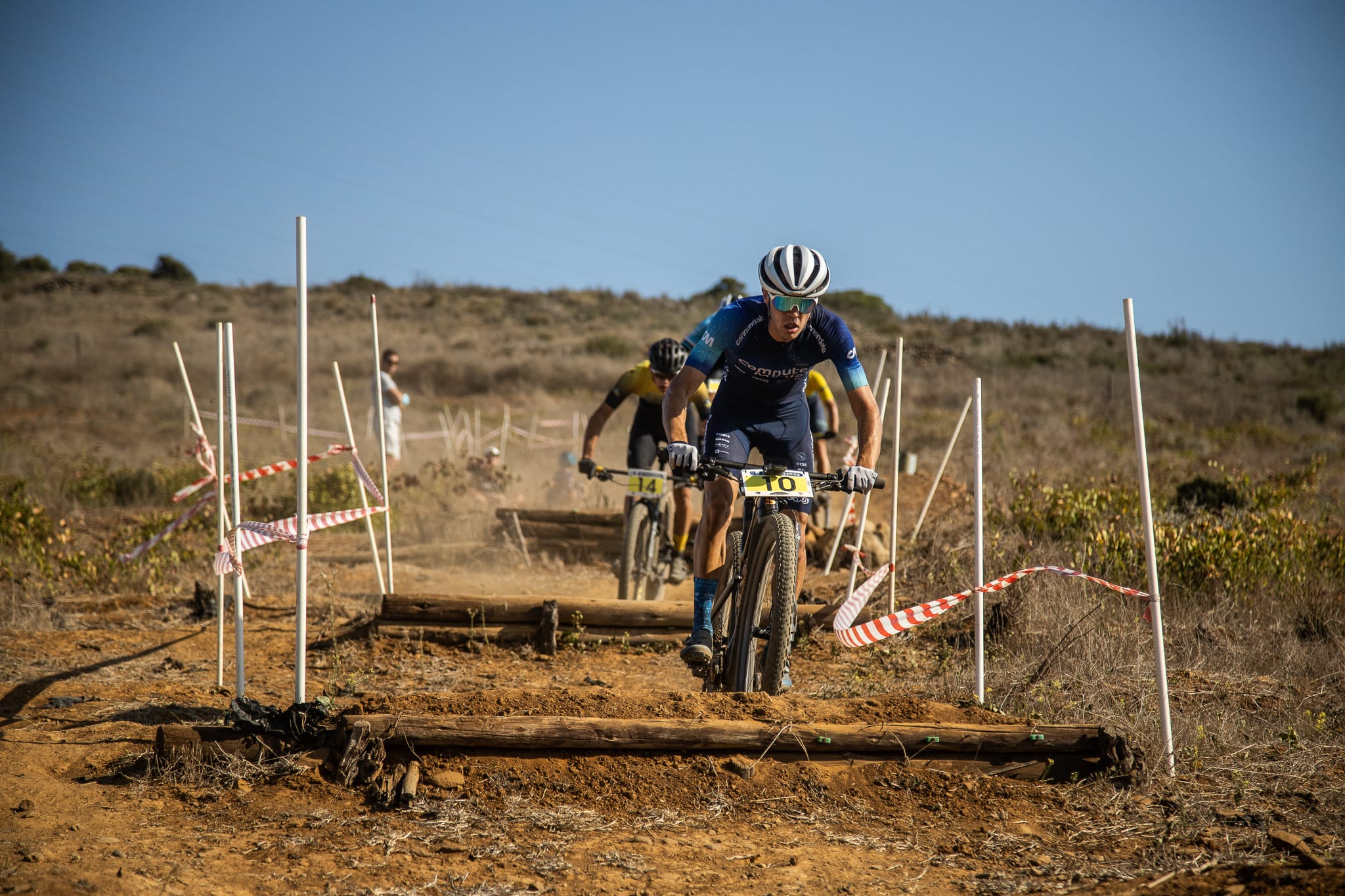 A jam packed weekend of XCO racing at Bloemendal Trail Park! The Computer Mania and WP XCO events that took place consisted of the SA XCO Cup #3 on the Saturday 17 April which doubled as the WP XCO cup round 2 of the season and was followed on by their round 3 the following day on the same track with may of the same riders returning for another 90 minute of competitive leg torture. The events were presented by the Tygerberg MTB Club of which the Bloemendal trail park forma a part and we were stoked to bring everyone the live broadcast powered by Protein2Go (links in article).

30+ degree temperatures were the order of the weekend with a slight respite coming from a strong wind on Sunday which did also add blowing dust to the equation!

These tough conditions took their toll as riders pushed themselves to the limit for Nation Cup and UCI points. Several riders pulled out or fell back in the field after coming out too hard at the start.

2 riders who did not seem to have this issue in the slightest were Candice Lill (Faces) and Matt ‘Wildebeers’ Beers (Type Dev NanoTime). Candice is well seasoned in the international racing circuits and Matt is a well known powerhouse and dominant force in the South African scene.

At the SA XCO Cup on Saturday, the Elite ladies set off in the heat of the day at 11:45 for 6 laps on the 5 km course. 3 climbs per lap, one of which had several testing technical rock features, as well as decisive A and B line options on the descents to give the riders investing in their technical skills the upper hand.

As mentioned, Candice raced off the front of the pack and nothing short of a mechanical failure or a crash could keep her off the top step of the podium. Behind her Tiffany Keep (Valley Electrical Titan Racing) was going head to head with Danielle Strydom (Insect Science MTB) for second position. Soon though, Frances Janse van Rensburg (Absolute Motion) would come blasting through to break up the two of them and drive hard to take second place with a fair gap to Tiffany. The final podium for the Elite Ladies on Saturday was as follows.

The Elite men took to the track at 3:30 pm with 7 laps to deal with before all would be said and done. On lap 2, Matt Beers would put in an attack with nobody to challenge him as he rode a solo race to claim victory at his first SA Cup of the season. Behind him the battle was on between Tristan De Lange (Imbuko Giant) and Keagan Bontekoning (Insect Science MTB). A flat tire for Tristan saw team mate Marco Joubert take his place in the battle for second and come out ahead of Keagan. Keagan’s Insect Science team mate, Arno du Toit, followed close behind as Gert Heyns of Pyga EuroSteel took the 5th place on the podium.

On Sunday we would see most of the top competitors return for another bout, bar a few exceptions. With the same course and same conditions, and a bit of wind added in, it was interesting to see some big changes in the standings at the end of the day!

You could say that things would certainly be different in the ladies race with 2 of the previous day’s top 5 (Danielle and Lehane) not making appearances for the 2nd day of racing.

Unsurprisingly, Candice would have another blinding victory but there was drama in the rest of the field. Towards the halfway point of the race Tiffany Keep had a crash on a rock feature which saw her out of the race! Frances, who wasn’t looking as potent today, got the free pass from 3rd to 2nd with Marzelle van der Merwe now in 3rd doing her best to close the gap of less than a minute to Frances.

At the end of the race, these were the results.

When the Elite men took off for their second race of the weekend it looks as though Beers would have a challenger for the lead in the form of Tristan De Lange. It wouldn’t last though as Matt was once again in beast mode and pulled away from the rest of the field. Phil Buys (Pyga EuroSteel) was looking in much better shape and overtook Tristan, holding a good gap in second thought the race.

The battle for third on the day was where the excitement was to be seen! A pack consisting of De Lange, Arno du Toit, Keagan Bontekoning, Johan van Zyl (Computer Mania MTB) and team mate Dan van der Walt. They all jockeyed for position with a couple attacks until the final lap where Dan van der Walt put the hammer down, dropping the group and closing down the gap to Phil Buys. Unfortunately for him, there wasn’t much time left in the race but he was glad to come away with 3rd on the day! Arno du Toit also shook loose of the group and landed 4th. A close end sprint for 5th was won by De Lange over Van Zyl. Very exciting racing to see! Final results below.

Thus is the weekend’s XCO action summed up! Be sure to check out those live broadcast links to see the action from the ground.

Have a good week!
J-Dogg