Tables Turned on the Queen Stage of the 2022 Tankwa Trek 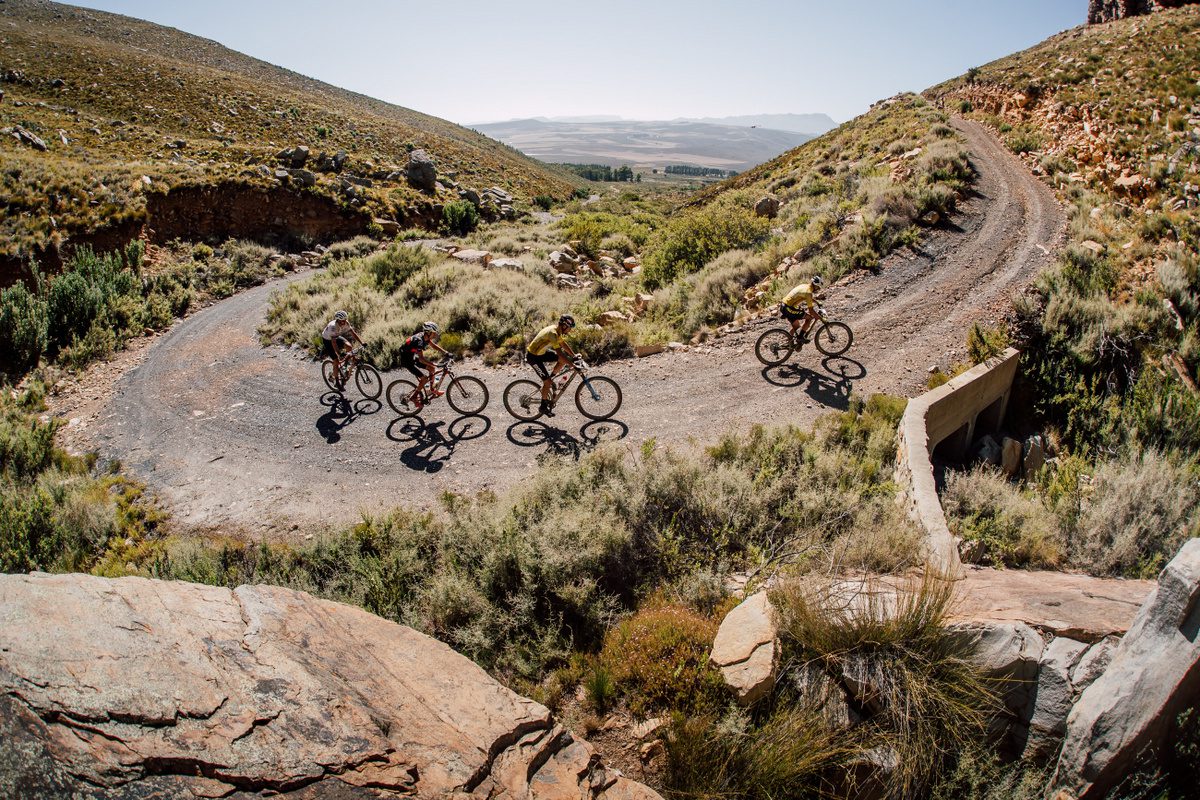 The Queen Stage of the 2022 Momentum Medical Scheme Tankwa Trek, presented by Biogen, was won by the all-South African teams of Faces Rola and Toyota Specialized on Saturday, 5 February. Matt Beers and Tristan Nortje recovered from a difficult second stage to outsprint the overall race leaders, Team Cornercard, on Stage 3. While in the women’s race Mariske Strauss and Candice Lill recovered from 5-minutes behind in the first 15-kilometres to win their third successive stage.

On Stage 3 the Merino Monster, South Africa’s most infamous mountain biking climb, loomed large. As did the R10 000 prize money for the first men’s and women’s team to reach the summit. The highest point of the race, at 1 750 metres above sea level was located 75-kilometres into a 99-kilometre-long stage however. Which meant that the trails to the climb saw fierce battles unfold.

The first victims were the Imbuko {type}DEV equipped by Giant team of Wessel Botha and Marco Joubert. A rear wheel puncture for Botha meant the team who had started the day in second position were chasing from the 25-kilometre mark. Despite receiving a wheel from Pieter du Toit, of Imbuko {type}DEV equipped by Giant B, Joubert and Botha still had a significant chase on their hands.

With Matt Beers on the front of the lead group there was no chance of the chasers regaining contact. When Nino Schurter came to the front, after 40-kilometres, only Toyota Specialized could follow the Cornercard team. On the Old Wagon Trail climb, from the Ceres Valley to the Koue Bokkeveld plateau, Schurter, Filippo Colombo, Beers and Tristan Nortje continued to build on their advantage.

Behind Alan Hatherly and Simon Andreassen were leading the chase. The pair had been joined by Botha and Joubert. At the start of the race’s main climb the Cannondale Factory Racing and Imbuko {type}DEV equipped by Giant were 3 minutes behind the leaders. They were followed by MES Electrical Suppliers, 2 minutes further back.

On the steepest slopes of the Merino Monster Colombo started to struggle. Beers and Nortje seized the opportunity and gradually edged away from the race leaders. “We were feeling good and climbing well” Nortje confirmed. “We saw Colombo was suffering a bit more than us. But unfortunately, about 10 minutes from the summit, I shifted and my rear derailleur didn’t engage. The battery was flat and I was stuck in the fourth cog from the top of the cassette.”

As a result, Schurter and Colombo raced through the Anderson Transport King of the Mountain hotspot in first place. “We caught them again on the descent and then rode with the Cornercard team back to the finish” Nortje explained. “It was great to take the victory too. After the first two day’s and all the difficulties I had… winning today was very special.”

Toyota Specialized’s victory was by just 2 seconds. Cornercard finished just behind and Cannondale Factory Racing completed the podium. Hatherly and Andreassen had lost their third position on the climb, but their descending skills allowed them to regain contact with Konny Looser and Alexander Miller on the run into Kaleo.

Having caught the Swiss/Namibian pairing Cannondale Factory Racing then dropped MES Electrical Supplies in the final few kilometres to earn their first podium place of the race. Further back in the men’s field the victorious Veterans team placed tenth overall. Karl Platt and Udo Bolts, of Team Bulls, have been dominant in their age category; despite 55-year-old Bolts being eligible for the older, Masters’ competition. The pair started the day 8 minutes behind the AA batch of elite men, yet managed to beat a number of them back to Kaleo Guest Farm.

In the women’s race Lill suffered a puncture on the Old Gydo Pass descent. The valve of the Faces Rola rider’s rear wheel was leaking air. It took her and Strauss the best part of 5 minutes to get going again.

Faces Rola spent the next 30-kilometres chasing Sarah Hill and Theresa Ralph. Once the women in the pink Anderson Transport leaders’ First Ascent jerseys regained first position on the road there was no stopping them. They climbed to the Anderson Transport Queen of the Mountain prize and then descended to a third stage victory.

Strauss and Lill’s victory margin was a significant 16 minutes and 39 seconds. Efficient Insure Infinity Racing’s Kim le Court and Samantha Sanders completed the podium. The result hands Faces Rola a 46-minute general classification lead over Hill and Ralf, heading into the final stage. In the men’s race Cornercard’s advantage is 4 minutes and 53 seconds over Toyota Specialized. Despite finishing fifth on the day Botha and Joubert did enough to maintain their third position overall, they start the final stage 12 minutes behind Schurter and Colombo. More importantly perhaps they are 4 minutes ahead of Hatherly and Andreassen.

The final stage of the Momentum Medical Scheme Tankwa Trek, presented by Biogen, take in just 1 000-metres of climbing in 70-kilometres. It should be a fast day, filled with flowing singletrack. Mountain biking fans can follow the action on Twitter, @tankwatrek, from 06:30. Photo galleries and videos from the race are available on the Tankwa Trek Facebook page and on Instagram, @tankwatrek. Live tracking, thanks to SPOT, can be found here.

Please visit www.tankwatrek.co.za to view the full results from Stage 3.