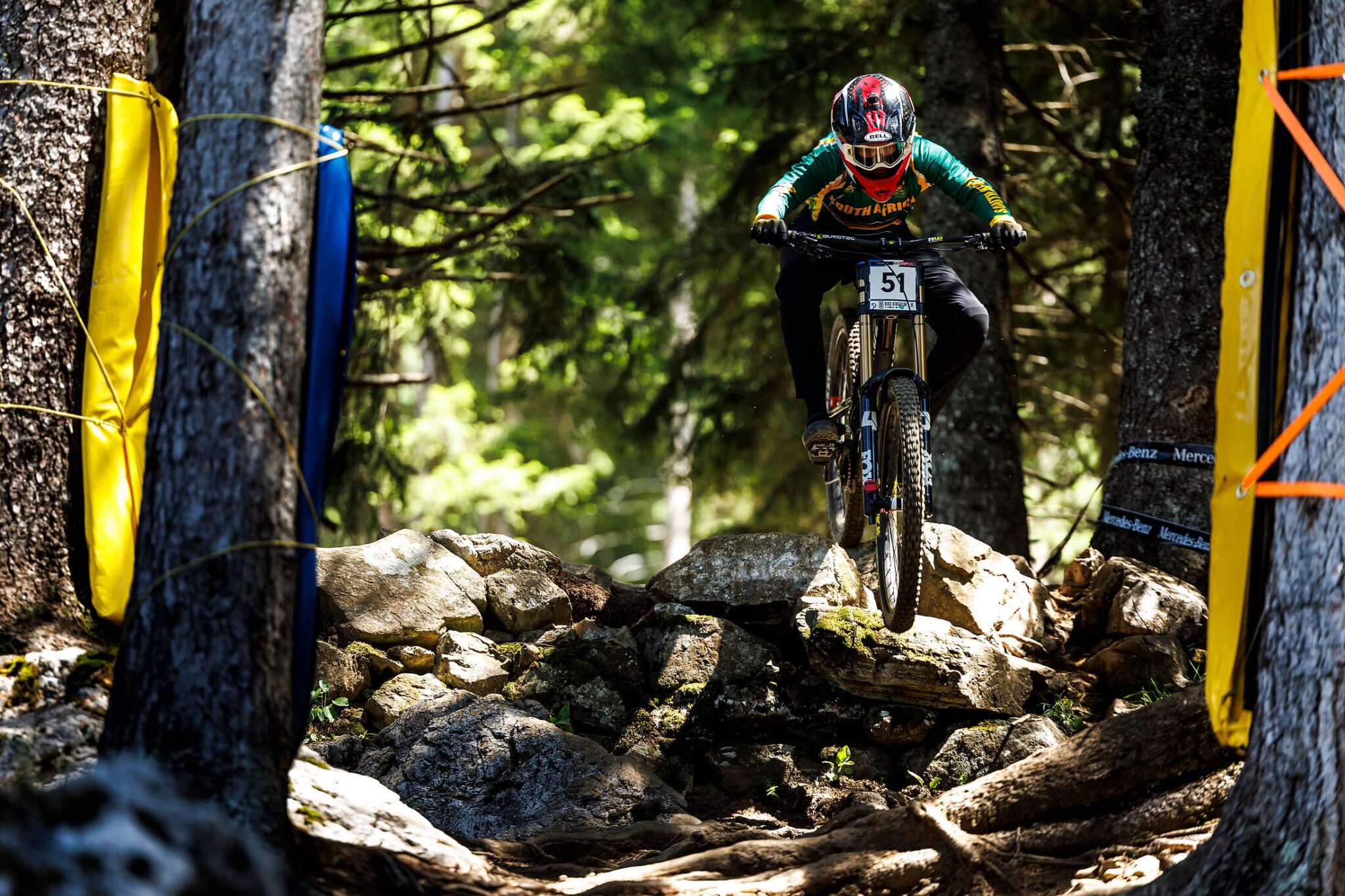 The ranks of the elite riders at the UCI Downhill Mountain Bike World Cup are no mean feat to break into. Times on track are numbered by seconds and milliseconds with only the top 60 Elite men qualifying for finals at each round. Even then, to get onto the live stream and really start making a name for yourself just sneaking into the top 60 isn’t going to cut it. For that you’ll need to be closer to the top 30 mark. Well, the young South African Christopher Philogene cracked the code in Fort William this season, finishing 25th in finals, just 11 seconds off first place on a four and a half minute track!

It has not been all downhill from there though, the following rounds at Leogang and Lenzerheide were tough going for Chris. We caught up with him to hear his story on moving to the UK in order to get closer to the racing scene and attempting to launch his World Cup Downhill career with his brother Jono at 2 Bros Racing.

Howzit going Chris, for those who don’t know who you are give us a quick bio!
Chris: My name is Christopher Philogene, I am 23 years old, Born and raised in South Africa. I immigrated to the UK along side my brother Jonathan in 2017 to persue our dreams of making it as a professional downhill mountain bike racer. I have felt like there is so much for me to achieve in this sport and the thrill of chasing it is what I love the most. Along with that I love the pressure of racing, that feeling as you about to leave the start gate is like no other for me.

WA: So Chris how did the Downhill racing career begin? Who were the inspirations and where was the passion born?
Chris: Two wheels started at a young age for us. Our mother and father dedicated all their time and hard earned money to travelling us around the country. We started racing motocross at the age of 4, being very competitive up until the age of 8. We switched between many 2 wheeled disciplines including cross country which was ultimately where the downhill interest came from. We would nag our father to go and watch the downhill on the other side of the mountain. We always loved the thrill of freewheeling down the single paths but hated the pedal up the other side. We then had it in our minds that Downhill is the sport we loved!

WA: Having grown up in South Africa, when did you make the call to head over to the UK and what was the main driver of that decision?.
Chris: We are two of the few downhill racers in South Africa who are lucky enough to hold British passports. With this we always planned to move abroad, somewhere where we had a solid base to race big events around the world and where opportunity was ripe. Our parents were the main drivers of the decision as they had the belief in us and encouraged us to go live our dreams.

WA: You and your brother Jono have started the 2 Bros MTB Racing Team. What was the thought process / journey that went into formalising your racing careers with this step?
Chris: This was actually started by my father back in 2015 as we were preparing to represent SA in our first ever World Champs in Andorra as Juniors. The idea was to stand out. Using the brother aspect, we double up on exposure. We also wanted to show some level of professionalism. Most importantly my father instilled it in us that this was a brand that we could carry with us for life and always have the potential to branch / grow into something else.

WA: How are you guys making it work? Are you working or studying full time, who are the main supporters of your programme and what are some of the goals you have for 2 Bros Racing in 2022?
Chris: So Jono and I are currently working full time Monday to Friday at Start Fitness in Newcastle city centre and have been working there ever since we moved to the UK. What can I say, we hit the jackpot. What an awesome place to work. We have never looked back since, outside of our hard work and talent they are the main reason we are doing what we are doing. They are so supportive with our careers, just allowing us to take the time to go racing is enough let alone all the equipment we get sponsored by them.

After being out of the race scene for the two years of covid we are keen to just branch out and network in 2022. We started a YouTube channel to give supporters an insight into behind the scenes of what goes on at the races which is a bonus for the exposure. This and all my social platforms are actually all controlled by my girlfriend (Jen.uine Productions) which is another side to the programme that is so impactful in growing the 2 Bros brand.

WA: You had a great run at the Fort William Downhill World Cup a couple weeks back, qualifying 26th and coming home in 25th on your finals run! What came together to make the run happen for you? What did you learn about developing your race craft at Fort Bill?
Chris: Fort William was a tough weekend with the weather and track conditions we had. I had great support from the little family team we had in the pits that made all the difference. What feels like always for me lately, is going into the unknown. I was not sure how I would do or where I’d end up so I gave it my all. I had a good strategy for practice. I chose consistent lines as I knew I was the first group to practice in the morning and I one of the last men down for qualifying.

My run was clean which was crucial in those conditions, a few mistakes but nothing to major. The relief and confidence was great going into the finals. I had a good run just managing to hold on towards the bottom. I believed and continue to believe I’m among the top 20 riders at this stage of my career and getting 25th gave me more fire to push for that top 20.

WA: Following Fort Bill you had a tough week in Leogang I seems. The conditions were terribly muddy and you didn’t manage to qualify. How did you handle that situation and looking back what would you have done differently?
Chris: Conditions were tough. It was a bitter pill to swallow not qualifying. I had a slide out just after the first turn which made me push harder the rest of the way down which is exactly what I didn’t have to do. I ended up having another costly mistake and then further down another slide out. I missed the final slot by 4 seconds. I learnt a lot from that weekend and how I should have managed a run like that even after the first slide out. There was no need to push on, instead I should of stayed composed and continued with the original game plan.

WA: This past weekend at the Lenzerheide World Cup you managed to qualify again (no small feat) and finished your finals run in 52nd (+12.567 sec). How did the weekend go from your perspective?
Chris: After the two previous World cups, I was fired up for more racing. The weather forecast was finally looking great, I took my time during practice to look at various line choices and build up my speed slowly. Qualifying came around and the run went okay, not the most ideal, but was happy to just make it into the Finals. Going into the finals, I found myself feeling confident from practice. My race run started off great until I started feeling fatigue towards the end of the track, which caused me to become very hesitant and slow down my pace. Very frustrating end to the day, but I am looking forward to Andorra next weekend for another chance to flip things around.

WA: What does the rest of the year’s racing look like for you?
Chris: Next up Andorra then we have a couple more British Nationals, and in between that I am hoping to be selected to represent South Africa at the World Championships in Les Gets, France (18-21 Aug). The weekend straight after that, the final World Cup of the year in Val di Sole, Italy.

WA: Thanks for chatting with us Chris! All the best for your racing. How can we follow the rest of your season and any final words to the fans at home?
Chris: Thank you for your time! Appreciate all the support, for all those who would like to follow my journey, my Instagram and Youtube is where all the action and live updates will be. Instagram @christopherphilogene14 and Youtube @2 Bros Racing. To all those out there who have supported my journey so far and all the new fans, thank you so much for all your positivity and supportive messages, all the love is such a great motivator and drive to keep doing what I love.