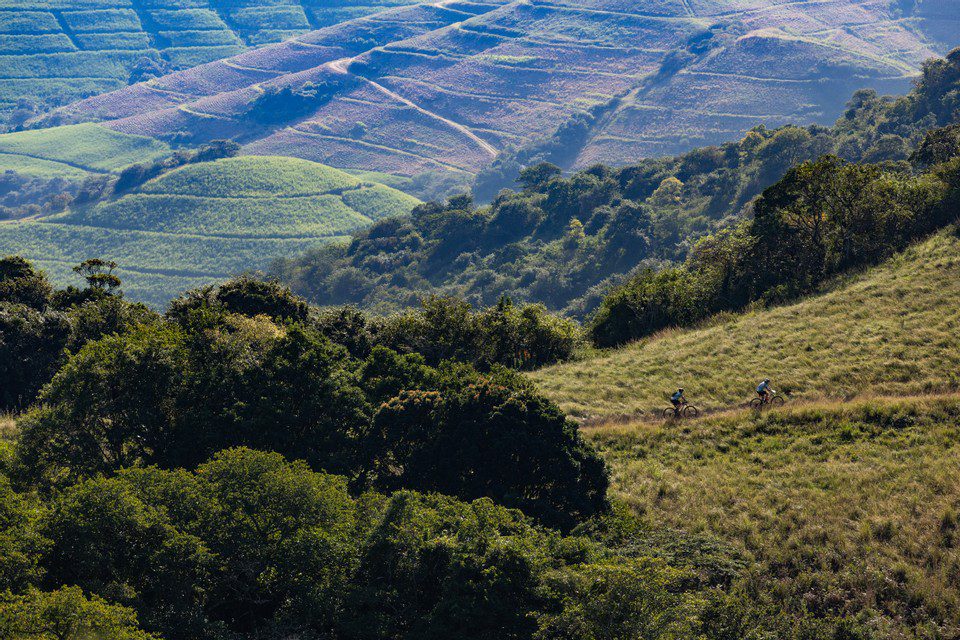 In 2 months time we will see the return of the sani2c nonstop on the 3rd and 4th of June 2022. An event taking in all the riding typically covered in the 3 day sani2c Race and Adventure events but in one big sub-24hr mouthful! The first ever sani2 nonstop ran in 2007 but it has been many moons since then and now as marathon riders are looking for bigger and better rides to test themselves on, the challenge is returning for those brave enough to take it on! There are a few entries left for you and your intrepid team (if you’re up for it) that can be found here, but read on to find out more about this monster of a MTB race!

“When we first started nonstop we were probably a little bit ahead of its time but now people are riding further, bikes are better, and routes are faster. I am excited to see how quickly the first teams are going to get through the route because I think they are going to surprise me! It is going to be hard packed and really fast given that the Joberg2c and sani2c Race and Adventure riders would’ve all just gone through” – Farmer Glen (event organiser)

The 240 odd kilometre race isn’t necessarily going to be a straightforward affair! A midnight start, unofficial and official checkpoints, team dynamics, bicycle rules, and of course some proper mountain biking to handle between the Southern Drakensberg and the Scottburgh beach. There has also been much enquiry about the route for the nonstop and how it might vary from the normal sani2c route. With much to speak about let’s dig into some of the interesting details!

What bike to ride? Would you brave it on a gravel bike? You’ll certainly be fast on the open road segments but possibly quite out of your depth on the technical single track sections. Well, if you are fortunate enough to be in possession of both a mountain bike and a road / gravel bike, the rules stipulate that you are allowed to switch between the two during the race! How the racing teams work this into their tactics will be very interesting to see! Oh and yes, E-Bikes will be allowed so fear not if you prefer to ride supercharged.

If anyone had it in mind to take on the event solo, you’re going to have to find yourself at least 1 other rider as well as a support driver to make up the minimum team size of 3 (the support crew are considered team members). Teams may have up to 4 riders but a maximum of 1 support vehicle (with 1 or more support crew in the vehicle). To reinforce the importance of the support crew as a team member, they will be required to cross the finish line on foot with their riders in Scottburgh! Sprint finish anyone?

Choose your team wisely. A good mix of experience in endurance riding will be good to have but of course be wary of large ability deficits in the team. Someone will always be the nail to the hammer but the smaller the ability gap the better! ”Planning with your seconds around when you’re going to meet them and what you’re going to eat is important as it is a long day out” notes Farmer Glen on top of that.

With regard to preparing the mind and body for sani2c nonstop Farmer’s wisdom is as follows. “I think hours in the saddle are important. You don’t have to be extremely fast but those who have spent time doing long back to back rides are going to be the best off, their bums aren’t going to get sore, everything will just be used to pedalling for a long time.”

As mentioned, there have been more than a few comments and questions on how the route will differ from the typical route used by the sani2c Race and Adventure. Now the team at sani2c are busy putting together some detail on the route variations as well as plotting out ideal locations for support crew to meet with riders .etc and that info will be released in the coming weeks. Farmer Glen had a few points to share on the route changes in the meantime.

“We are cutting off a few corners, you’ll see that we have cut close to 25km off the normal sani2c route but we are still going to go down all the main parts of the sani2c route such as the Umko Drop. Iconic is out for sani2c nonstop (for this year). At that point you’re going to stay on a district road and should be able to eat. That will be around breakfast time, a crucial time to get some proper food in and it’ll be nice to be with your seconds for a good half an hour along that drag.”

If you’ve had much of a look at the sani2c nonstop information to date you may be well aware that the event is intended to kickoff in the middle of the night. Now there is some method to this madness. Having the start around midnight will serve well to have most of the teams in at the finish before nightfall and get some decent distance done before the midday sun heats things up! Bike lights will of course be mandatory to prevent unnecessary tree encounters and detours. Below you can read farmer Glen’s comment on the midnight start.

“We still haven’t got the exact start time nailed down” says Farmer Glen. “We have preemptively said midnight but we’re pretty sure that we’re going to start a little later than that. It will depend on when we test ride the route. We are going to be test riding it in the next couple of weeks now that all the bridges are going in and the route is prepared. It is good to get going early so that you can ride for 3 or 4 hours before the sun comes up when you’ll get a bit of a new lease on life! The idea will be to have the first teams going down the Umko Drop as the sun comes up”

The thought of cresting that Umko valley descent as the sun is rising with 90km or so under the belt seems pretty incredible if you ask us. Might event have to stop for a picnic to take in the moment! If anyone has ever struggled with traffic on the trails at sani2c, that isn’t likely to be an issue at nonstop as the smaller riding field spreads out over the 240km route. Certainly an appealing factor to the nonstop event!

There will be more info on its way with regard to the nonstop route specifics and other event developments so be sure to keep an eye on the sani2c website and social media. If you’re looking to prepare well for the 3 day or nonstop events, hit the link here. We’ll see you on the trails!