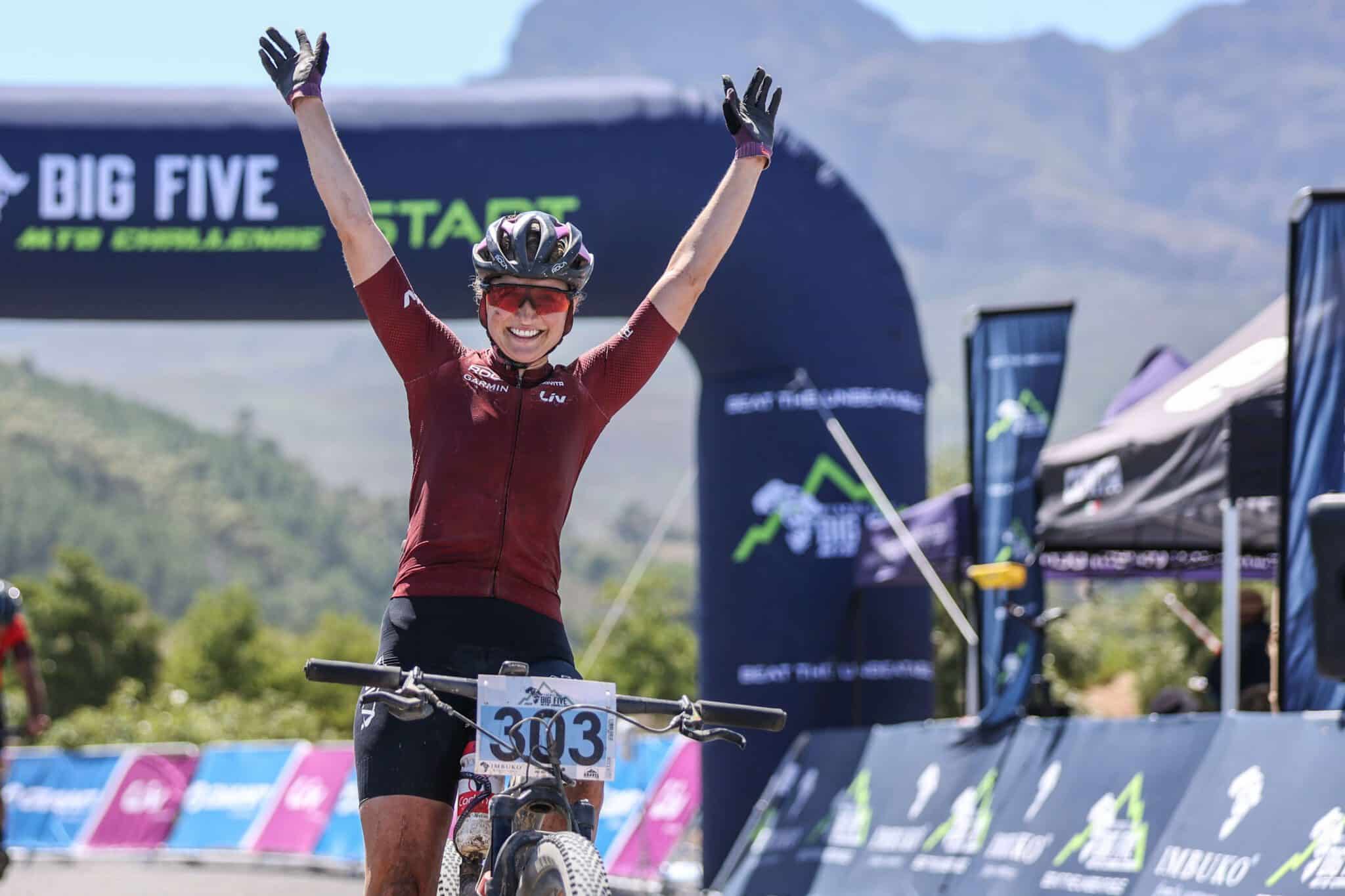 In the enormous Western Cape mountains of Wellington, just short of 300 ambitious riders saddled up to take on the Imbuko Big 5 MTB Challenge on Saturday. Conditions were cool in the morning with minimal wind, a welcome contrast to the previous year’s gale force conditions, looking to heat up into the mid 20s celsius later in the day.

Set shortly before the ABSA Cape Epic in the calendar to give riders a litmus test for how they will size up to its infamously arduous stages, the Imbuko Big 5 means business when it comes to the physicality and technicality of the course. Riders ascend and descend 3020m over the 75km course and often on unforgiving terrain. Traction and smooth lines are hard earned on the climbs and there is no time to rest on the brilliantly crafted but relentlessly technical single track descents! All aspects of a well rounded mountain biker are put to the test at this race.

As may be assumed by the name, the vertical gain is made up from 5 big climbs. Haweqwa, Seven Peaks, Obiekwa, Groenberg, and Patatskloof. Climbing terrain was made up of a mix of jeep track and single track while all descending, apart from the Patatskloof gravel roads, was done on the top class single tracks of the area. Many riders participated in the event purely for the incredible descending trails!

Coming into Saturday’s race the women’s entry list was looking potent while team Imbuko {type}DEV had a strong showing in the men’s field at their home race. Mariske Strauss (Liv South Africa) and Yolande De Villiers (The Coopetto) looked to be the favourites in the women’s race but Danielle Strydom, Mari Rabie and Cathy Colyn were also eager for a podium tussle. Marco Joubert, Wessel Botha, Pieter Du Toit, Stuart Marais and Franko Van Zyl made up the Imbuko {type}DEV contingent while opposition to the home team riders came in the form of German rider Sascha Weber (Trek Vaude), HB Kruger and Matthew Keyser (Valley Electrical Titan Racing). Given the race was a solo event, the teammates in the field were not going to be racing friendly with each other!

Last year it was Matt Beers and Candice Lill who rode off the front of their competitors on the first climb and held the lead all the way to victory but we were in for a much more exciting tussle in 2022. Mariske opened up a gap over the chasing group of Yolande, Danielle, Mari and Cathy. Yolande would start to put time into the other 3 ladies and held a close gap of just over a minute to Mariske who had to keep the intensity up to avoid slipping into Yolande’s grip.

“I actually caught myself glancing back a few times” said Strauss, aware of Yolande’s close proximity, even spotting the South African marathon champion close behind on a few of the more open sections of the course. Mariske managed to keep her focus forward, going as hard as she could manage, and it paid off in the end with a gap of nearly 2 minutes to Yolande. Danielle Strydom battled the big mountains of the Western Cape and the other ladies to secure 3rd ahead of Cathy Colyn while Mari crossed the line in 5th.

The major separation came on climb 2, Seven Peaks. The three Imbuko {type}DEV riders went into the single track at the base of the climb with Sascha 15 seconds off the wheel but it was Marco Joubert who emerged on the descent with a 50m gap to Wessel Botha as Pieter chased them 2 minutes back with Sascha another minute or so behind.

Marco and Wessel would battle it out at the front of the race all the way through to the final climb at Patatskloof where Wessel unleashed an attack on the steep gravel road climb. The race seemed to be over with a 30 second gap between them and just 8km to the finish.

“When he went, I tried following him and either I was going to blow up or reel him back, but I just managed to measure my effort well” Marco shared his thoughts on Wessel attacking on the final climb. When he saw Wessel go, knowing his teammate as well as what was to come on the final 8km, he estimated that Wessel would still be catchable in the final kilometers of riding. He read the race brilliantly and caught onto Wessel’s wheel a couple kilometers later before Wessel unfortunately ran wide on a loose corner. Marco took the opportunity to put the hammer down and blast to the finish, taking the win by a narrow 24 seconds.

Further back, Sascha had eventually reeled in Pieter Du Toit. They went into the final climb together but Sascha’s repeated attacks were too much for Pieter to handle and the German rider left Du Toit behind to take 3rd on the men’s podium. Matthew Keyser rounded out the top 5 behind Pieter. See the time splits below.

To watch the replay of the live racing updates on the WILD AIR Sports Instagram channel CLICK HERE or find the event highlights video HERE.

If you want to test your metal as a mountain biker, the Imbuko Big 5 stands as one of the ultimate tests of strength, endurance and technical bike handling skills in the country. Keep an eye out for it in the 2023 calendar if you are up for the challenge!