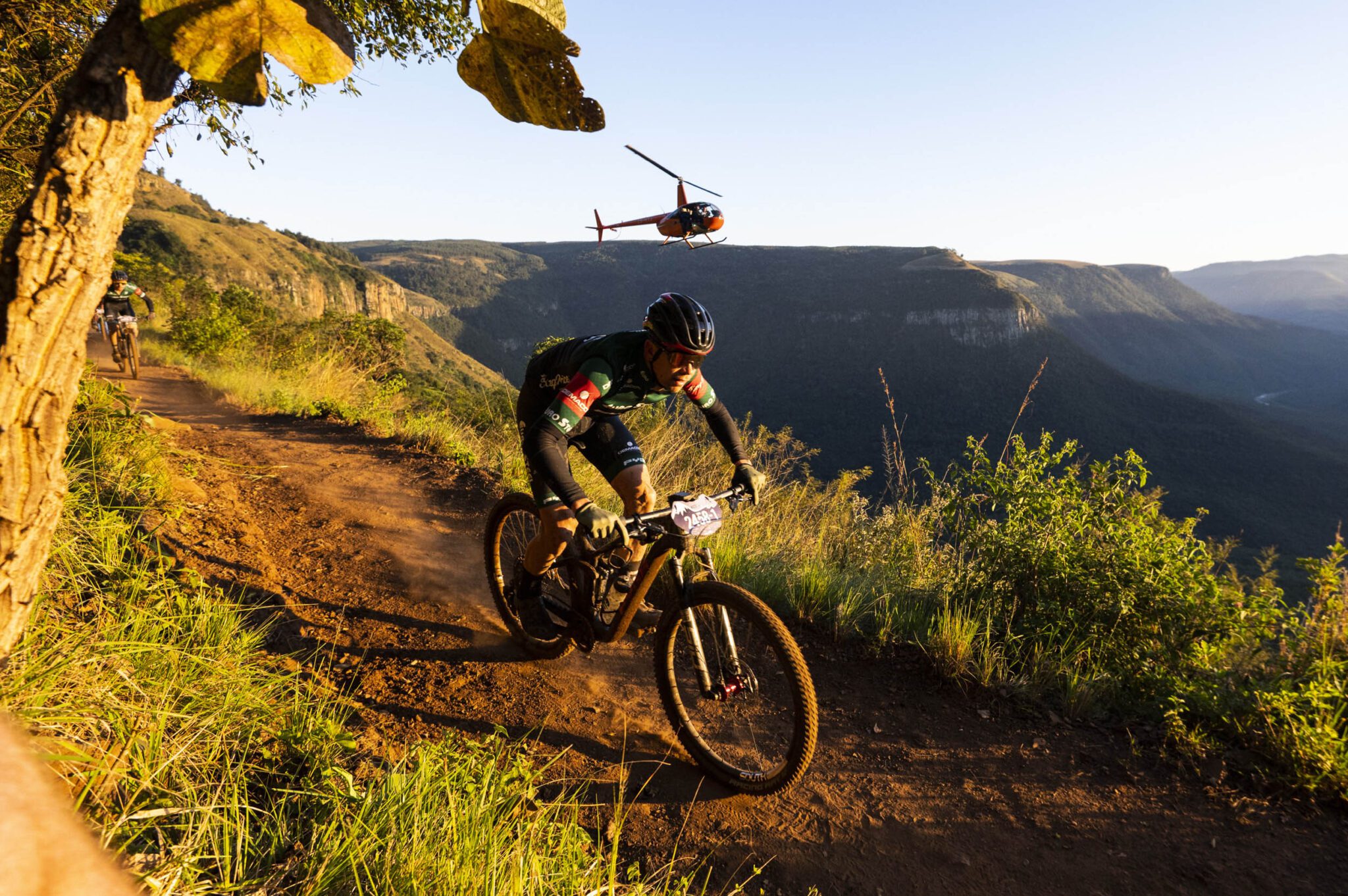 Jolivet Farm. The KAP sani2c’s queen stage provided another day of tight racing between the top three teams on 92kms of trails between Mackenzie Club and Jolivet Farm, with the Imbuko {type}DEV team of Marco Joubert and Wessel Botha managing a 30-second gap with the Insect Science team of Arno du Toit and Keagan Bontekoning when they crossed the line in 03:23:29.

PYGA Euro Steel’s Phil Buys and Gert Heyns came third, nearly four minutes later (03:27:11). Phil Buys suffered a puncture towards the end of the Umkomaas Drop just 18kms into the race, and although he made quick work of returning to the group up Iconic Climb, he and Gert Heyns paid later for that exertion.

Solo rider Marc Pritzen of Honeycomb Pro Cycling was again in the mix at the sharp end of the race, slipping back at the 71km mark to finish in 03:30:04, a few minutes behind the 3rd placed PYGA Euro Steel.

At the top of Iconic (60kms) the three teams and Marc Pritzen were together, the PYGA
Team looking strong together while Marco Joubert was at the back. His teammate Botha dropped back to collect him when they hit the district road after Iconic, and some good tactics and consistent pressure ensured the team was  the strongest of the day.

Du Toit: “It was quite an interesting day actually. Going down the Umko drop PYGA got in in front and they were sort of pushing the pace, it was quite quick down there. Then Phil got a puncture close to the bottom, and I knew we had to capitalise on that. They made it back but I’m sure they spent some matches there, we could see that at the end, I think they were just a bit empty.

“So we capitalised and pushed at the bottom, Imbuko was just following and it seemed like they were under pressure up Iconic. All the top three teams had one strong rider and one guy suffering so it was quite well matched actually, but Wessel managed to pull Marco back on the district road and they pushed from there. Keagan was really strong, he was riding towards the front. Myself, Gert and Marco were the weaker links in the teams.”

Bontekoning “I definitely think I paid for the effort of going up Iconic fast. I think I could have probably backed off a little bit going up and probably stayed with Arno but I thought it would be good to just ride my own rhythm instead of getting stuck behind riders, and I definitely paid for that the last 10kms.”

Joubert was grateful to be partnered with Botha: “It was a hard day for me once again, Wessel had super legs, he was the strongest guy on the day for sure. He put everyone in the hurt box on Iconic Climb, and I think from there everyone was a bit gassed. There was a small drag after Iconic and I could see Wessel was really still putting everyone in the hurt box and small gaps were opening between the riders, so I thought I should try and gap the guys and have Wessel just tow me along instead of towing the whole bunch. And luckily that worked out quite well, Wessel dropped back and he towed me back quite quickly.

Despite a puncture around the 84km mark, the pair managed to keep the pressure on. Botha said he knew they had to close the gap quickly: “As soon as we got on that district road (after Iconic) we just pushed on and got back to the bunch. I then just had to keep a steady pace as I knew the PYGA guys would start hurting. Eventually they started to fade so I think it worked out well.”

With the third stage being a fast and furious one where there is often a sprint finish, the PYGA Euro Steel riders have a lot of work to do tomorrow if they are to close the four monute gap, but anything can happen and the race is definitely not yet decided.

Heyns says: “Tomorrow is another nice stage. It’s gonna be hard to make up the time but we’re going to try our best and otherwise there’s always also the stage win opportunity.”

Buys says: “We always know we’re going to go even faster than the first day, so getting a gap is going to be difficult, but we’re definitely going to give it a go. We’ve got two and a half more hours tomorrow to do something. So it’s not over but it’s definitely not going to be an easy one to take back.”

The Efficient Infiniti Insure pairing of Robyn de Groot and Kim Le Court dominated once again, and rode into the King’s Harvest Academy finish at 04:06:24, while teammates and rivals Theresa Ralph and Sam Sanders crossed the line twenty minutes later (04:26:28).

De Groot and Le Court were carrying a nineteen minute lead from stage 1 and rode a strong consistent race, not having to look over their shoulders at any stage of the day.

De Groot says: “You’re always fortunate when there’s no issues. We paired up well, Kim really paced herself well on the climb and I just tried to keep it nice and constant and I’m sure she probably got the company. We’ll see. Yeah, and then we rode really well together and it’s actually really, really good to ride with a younger rider that’s so mature.”

Le Court says: I didn’t know what to expect today because yesterday evening I found out I pinched a nerve in my neck so I was in quite a bit of pain this morning. So I was just going to take it as it comes, but from the gun my mindset just went into racing mode and I just went for it. Robyn is a super teammate, we rode really well together and I felt good on the bike the whole day. We didn’t take any risks on the downhills but we had fun, but we’re never not going to not go hard – if we go fast, the faster we go the more fun we have.”

After a tough day yesterday with faulty gears and a slip off the PG Bison floating bridges, Sam Sanders says: “My gears were working perfectly today so it was a much better day. Just so beautiful. We had a good ride, we rode a solid, consistent pace and I’m super happy with the day.”

About their teammates, Ralph says: “We heard that they went up iconic like a bat out of hell, so they put in lots of time on us there. They are riding solidly together, its a new partnership and on day 2 they seem to have it taped.”

Taking third place again in the women and the first Young Guns Women across the line, were Jone van Eeden and Karlise Scheepers of Team SkyNet Kleinplaas Pype (04:56:51).

The final stage will see riders take on a final 80kms from Jolivet Farm to Scottburgh. The race is being broadcast live on the KAP sani2c Instagram: _sani2c