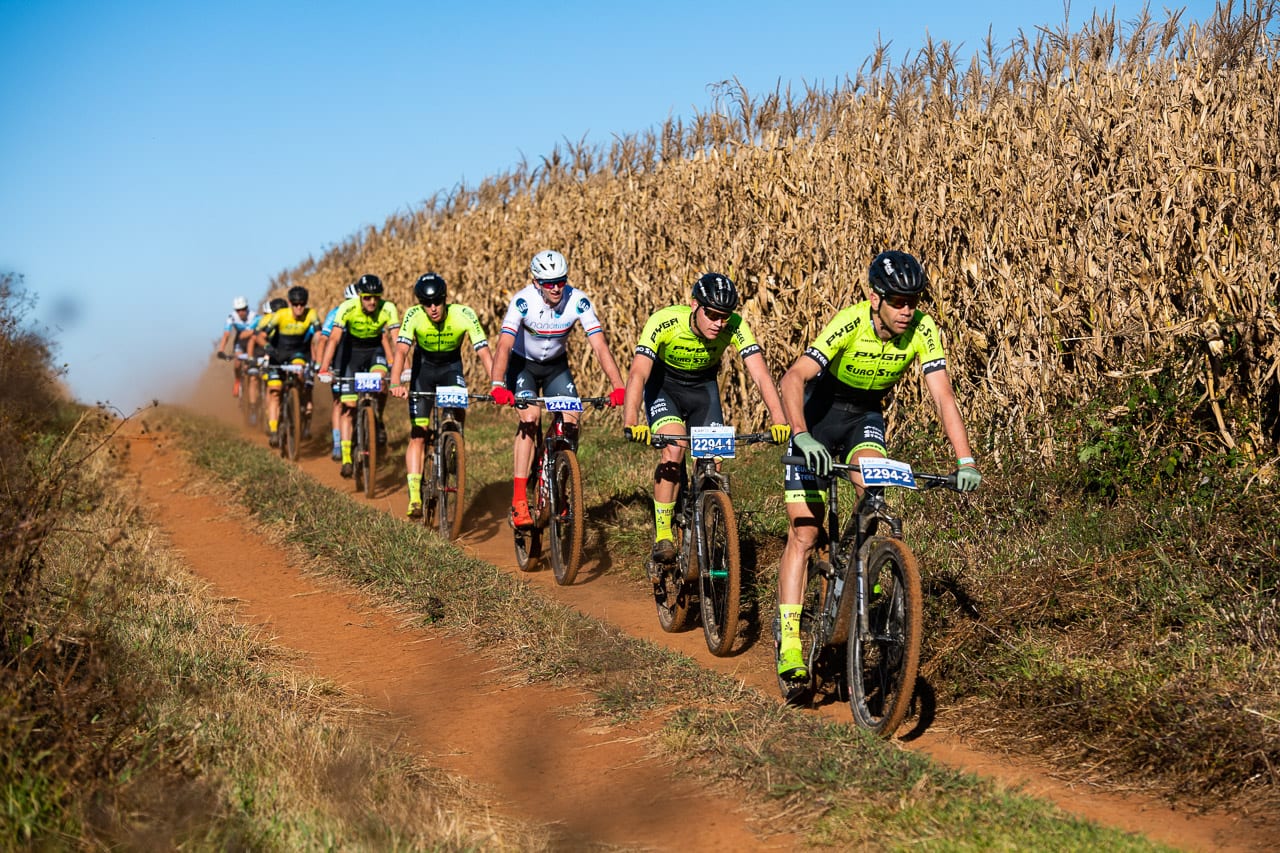 Mackenzie Club, 14 May 2021. It was a sprint finish as the PYGA Euro Steel team of Matthys Beukes and Gert Heyns took the stage win at day one of the KAP sani2c today, in a time of 02:50:13, just two seconds ahead of teammates Philip Buys and Pieter du Toit. Matt Beers powered across the line just ahead of the second PYGA Euro Steel team but his teammate Wessel Botha was seconds behind and the pair had to be satisfied with third place for the stage (02:50:19).

Riders set off from Glencairn Farm in Himeville on Friday morning and covered 82kms of mixed terrain and 1175 metres of climbing to finish at Mackenzie Club near Ixopo.

PYGA Euro Steel’s winning duo were very happy with their performance, says Matthys Beukes: “It was the three teams of us riding together, then it got a bit tactical with 15kms to go. It was tight racing, so I’m glad we could pull it off with some smart tactics. It’s good to have two teams in the top three.”

Gert Heyns: “We both felt quite good today, but its very hard to get away. Tomorrow should be a rougher route so there is more opportunity and there should be a bigger gap. We already have a good gap with our two teams in the top three, so from here we can obviously go for the win.”

Matt Beers was content with third place for the stage: “The PYGA boys are on form so I knew it would be hard to get a gap. They have 4 riders so they can play a bit more of a team tactic, so Wessel and I had to manage ourselves. We only lost a few seconds at the end; you are lucky if you get a gap on the first day, so I think it went well.”

Wessel Botha says of the sprint finish: “All three teams were on the limit as we approached the finish. Matthys was the strongest getting a gap, and when Gert kicked, it was just too hard for me to hold his wheel. I think we did a good job to minimise our losses and I’m feeling positive going into tomorrow’s stage. I really enjoyed the day, some super nice trails out there.”

says: “From the start the pace was quite high on the gravel road. We were in the front split but Keagan was at the back of the bunch. We knew we had to be at the front on that first climb, so Keagan had to surge to get to the front. The effort was a bit much and we were just off the back before the climb. We got back to the leaders at the first water point, but after that they surged again and we were then by ourselves for most of the race.

“I’m confident we will be able to hold the gap, tomorrow is a long day, and we had a steady consistent effort rather than the surging of the front guys, so hopefully today hurt their legs

One of the teams expected to perform well, DSV Pro Cycling (03:16:10), had technical difficulties and after a few kilometres Jacques Janse van Rensburg had to ride on only one gear until they could get assistance at the 40km mark. Janse van Rensburg says: “The GC race is over for us, but we just conserved energy and are now hoping for a good stage result.”

Dominant performance in the women’s race

De Groot says: “It was a smooth day, we were surprised to get a gap quite early and broke away at the 10km mark. We found a rhythm and worked well together.”

Mc Dougall, when asked about tomorrow’s stage, says: “I took some shots today so I think we’ll keep it steady and see how it goes tomorrow. I loved the day. The single track is insane, and as usual you can see a whole lot of effort from the organisers.”

Theresa Ralph says of their second place: “I felt my legs were cold and I couldn’t get them warm. When the girls attacked on one of the climbs they just went for it and I just couldn’t get blood flow to my legs. It was one of those days where the body was not working according to what was planned.

“Kim was amazing, she pulled me all the way. She can go out hard and fast so I definitely held her back, I think she could have stuck with Amy and Robyn to a certain point, but not me today. Tomorrow is a longer day and I tend to get stronger as the days go on, so I’m hoping for that. So we’re going to recover and give it a go tomorrow.”

Le Court says: “Last year was my first sani and it was in the mud so this year I am really happy with the weather, and the scenery was beautiful. Awesome to ride with T with her experience, I learnt a lot. It was tough, but I really enjoyed it.”

On their approach for tomorrow’s tough second stage that takes riders down into the Umkomaas Valley and up the “Iconic Climb”, le Court says: “We should be careful tomorrow. The gap is pretty big; it’s a long day and it climbs a lot, so I don’t think we should burn ourselves too much. We will take our own pace from the start and not try and stick with them from the gun; we’ll ride our own race.”