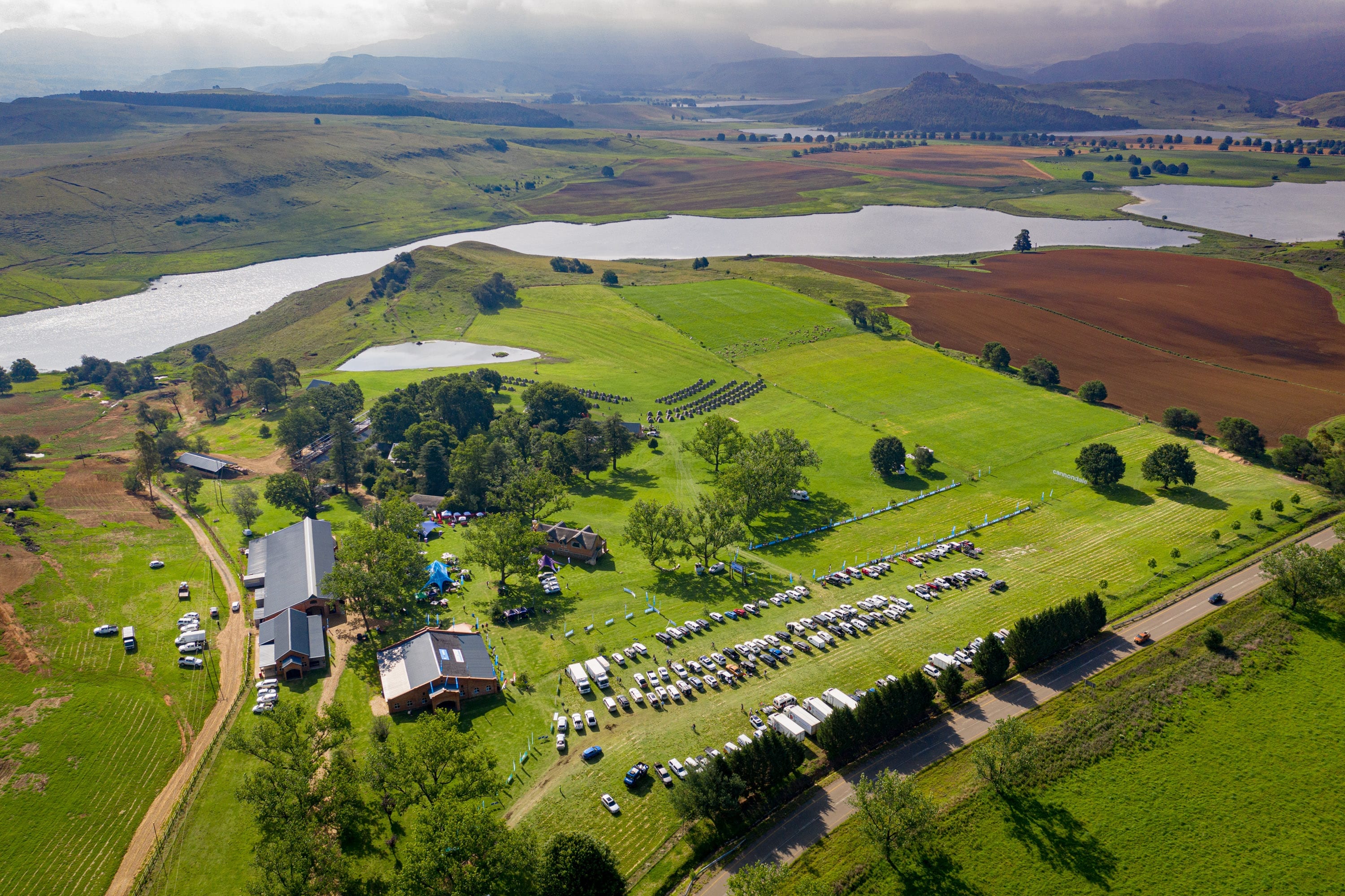 The KAP sani2c usually lands in the month of May when the temperatures are not too hot, nor too cold, and the usual rainy season in Kwa-Zulu Natal has passed. This was not the case for 2020. As a result of the disruption caused by the COVID pandemic, the event moved to December to make a comeback for 2020!

What is usually 3 events (Trail, Adventure, and Race) became just the Adventure (starting on the Wednesday 2 December) and the Race (starting the following day). 1500 riders per event became 500, and they all arrived at Glencairn Farm in Underberg stoked to be able to ride the sani2c in 2020!

The vibe in the race villages was certainly more relaxed and intimate with the smaller group of riders. A reminder of the early days of the event before it became the incredibly popular ride it is today! Glencairn Farm evolves every year to bring a better experience from the accommodations to the chill zones and eating areas. New cottages have been and continue to be built. The huge shed where all the meals happen got new walls and huge windows to shelter riders from the elements. The Race village experience really is top class here!

The December weather is volatile in KZN and the question on everyone’s lips before the event was “how wet is it going to be?”. It really didn’t seem to be a question of whether or not it would rain, but rather, how much water were riders and the event crew going to have to deal with? The temperatures were certainly cold for December in KZN! Sitting between 8 and 12 degrees on most days, certainly very chilly, but probably better for riding than the sweltering heat that is more likely at this time of year.

The time came on Wednesday for the first riders to set off on the 3-day ride to Scottburgh. The air was cold and the trail conditions were actually prime with just enough moisture to get some good traction going but not making them slippery in too many places. The Adventure riders were en route to the sea but the main focus was going to be on the following day’s event, the Race. There were several pro teams entered to battle it out at one of the few (and final) stage races of the year!

Day 1 included the infamous PG Bison floating bridge that takes the riders across a small dam at roughly 20km into the ride. From there on they enjoy a variety of single track descents through pine forests with a good helping of climbing to keep them honest. The Race kicked off at high speed on the Thursday as the A batch took off behind the Subaru lead car and headed for the hills. It was early on in the day, about 20km in, that Arno Du Toit and Gert Heyns of DSV Pro Cycling made a break on View Climb that got them close to a minute’s gap ahead of the main bunch. They would continue to extend the lead through out the day to finish with over 4 minute’s lead.

Meanwhile Philip Buys and Matthys Beukes of Pyga Euro Steel were battling it out with Young Guns Brendan van Eerden and Keagan Bontekoning riding for Insect Science Mountain Biking. The Pyga team came out on top at the end of the day along with Henry Liebenberg who was riding solo for Absolute Motion.

The Dormakaba ladies, Amy MacDougall and Robyn De Groot, took control of the women’s race on the first day. They opened the throttle after PG Bison floating bridge and began extending a lead on the Galileo Risk Infiniti team of Sarah Hill and Theresa Ralph. In 3rd place were the young guns, Frances Janse Van Rensburg and Kim Le Court (Team Absolute Deacon) who both come from a road racing background. Even though they were not very experienced in the Stage racing format, the youngsters pushed hard throughout the day and didn’t let the gap to second grow too large.

The first day took riders through to Mackenzie Club near Ixopo, just a couple kilometres away from the Umkomaas Valley that is the centrepiece of the 3-day ride to the sea! The riders of the Adventure just managed to get the weather window that allowed them to ride the trails of the Umkomaas Valley before they became too muddy. By the time the Race was supposed to be drooping into the majestic valley, the rain had ceased which unfortunately resulted in the mud clogging up and becoming unrideable.

These horrible trail conditions in the valley were proven by two rather gung-ho participants who decided to ignore revised the day 2 detour around the valley and tackle the muddy trails instead. They were picked up at 5pm on the side of a road, shivering and caked in mud, 11 hours after they had begun their descent. Safe to say, the call to detour on day 2 and make it a neutral stage was a wise decision in the end.

The neutral day and detoured route (which was largely gravel and tarred road) was not all doom and gloom as many of the top competitors enjoyed the social ride to Jolivet! There were a few wheelie competitions and some puzzling as the racing snakes tried to figure out the process of stopping for some snacks and a break at the water point instead of the usual blasting past at mach 1.

After the neutral cruise to Jolivet, there was an awareness that the final positions would all rest on the day 3 performances. Word in the village was that it was going to be muddy and the sandy soil that made up a lot of the course was likely going to make for mechanical dramas with rider’s drivetrains. It could be anyone’s race.

DSV Pro Cycling (men) and Dormakaba (women) held the leads going into the final day with 4 and 5 minute gaps to second respectively. The challenging teams were hungry so it was most certainly race on!

It wasn’t long before there were technical issues in the mud. Henry Liebenberg destroyed his derailleur early on and the 4th place team of CP van Wyk and Alan Gordon suffered a chain derailment at the bottom of the first major climb. The 2nd and 3rd place ladies teams experienced a few slide outs over the day. The battle against the elements was real on day 3! The Dormakaba team of Amy MacDougall and Robyn de Groot showed their strength and experience to extend their overall lead and take the win in Scottburgh ahead of Sarah Hill and Theresa Ralph (Galileo Risk Infiniti) in second and Frances Janse van Rensburg and Kim Le Court (Absolute Demacon) in 3rd.

In the men’s race, DSV, Pyga Euro Steel and Insect Science were all together for most of the day with a few break away attempts keeping the racing spicy! Arno Du Toit (DSV) and Keagan Bontekoning (Insect Science) both had drivetrain issues in the mud separating the group for a while but with 20km to go the top 3 teams were all together. Insect Science were hoping to go with DSV in a break to get ahead of PYGA Euro Steel and claim 2nd overall. This didn’t materialise unfortunately and front 2 experienced teams rode away from the youngsters as they closed in on Scottburgh.

With just 5km to go, Phil Buys (Pyga Euro Steel) punctured his rear tire on a piece of concrete. The DSV team rode away to the finish, extending their overall lead as Phil and Matthys limped to the line, managing to hold their position ahead of the Insect Science team in 3rd.

The December edition of the race brought real adversity. The weather conditions were really tough, especially on the 3rd day, but everyone rose to the challenge. The camaraderie and stoke was tangible through the journey. Seeing everyone get on with the ride and actually have a blast, despite a few spills, was pretty awesome! The KAP sani2c will be back in May for 2021. The Adventure is already sold out but there should still be some availability for the Race on the 14-16 May! Click here for the entry page.

That’s the wrap on the 2020 KAP sani2c. What a time it was and a solid entry into the history books!

See you on the trails,