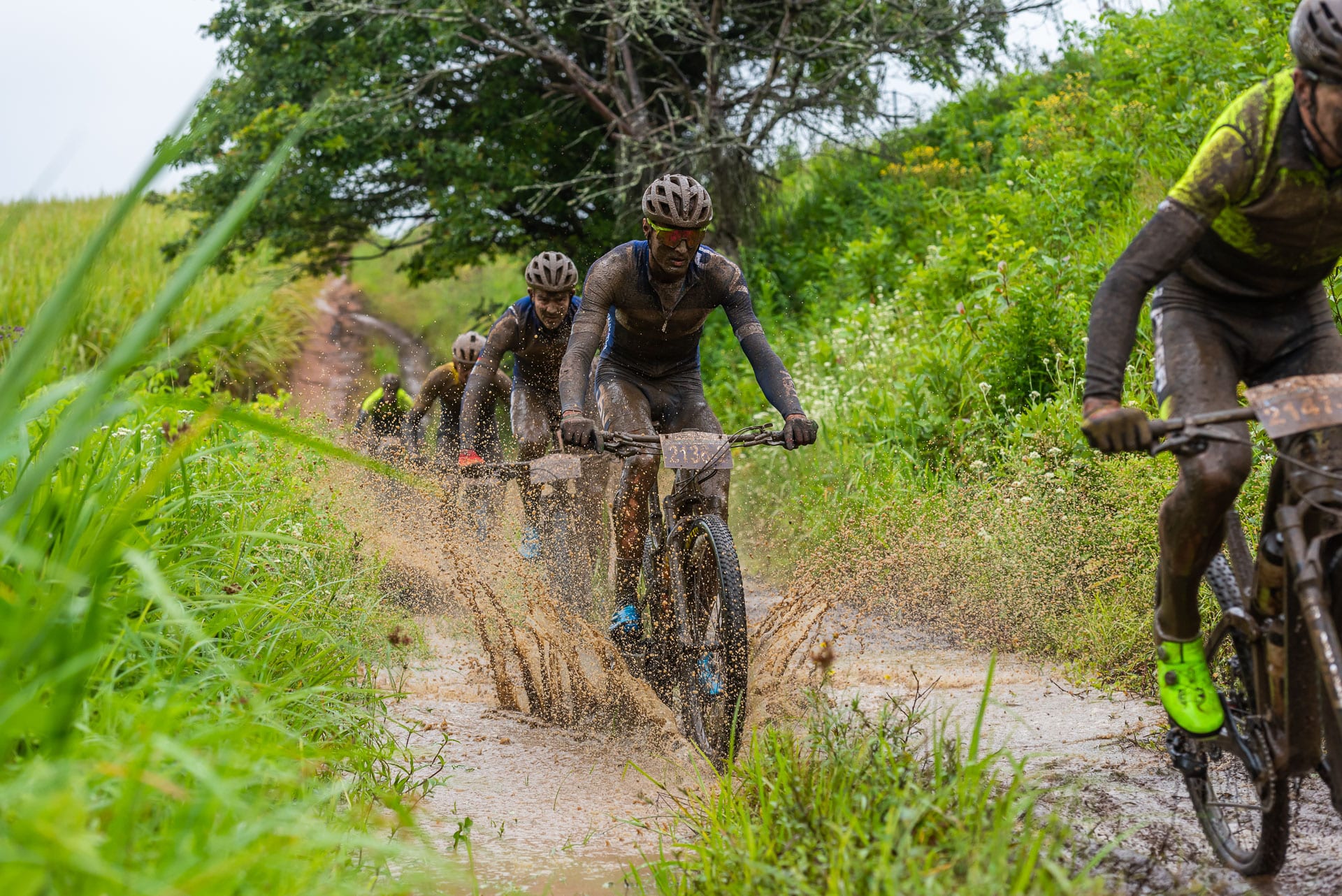 Scottburgh, 5 December. DSV Pro Cycling’s Arno du Toit and Gert Heyns won the third and final stage of the KAP sani2c at Scottburgh Golf Club in KwaZulu-Natal today, securing the overall crown in a time of 06:10:38, after a convincing performance over the two days of racing. It was a wet and muddy affair making for very technical riding.

Stage 2 was declared a neutral day after poor weather and dangerous conditions caused the race to be rerouted. The third stage saw riders cover 86kms from Jolivet farm to Scottburgh.

The dormakaba team of Amy McDougall and Robyn de Groot won the women’s race in an overall time of 07:03:10, after a clean sweep of stage wins.

Du Toit and Heyns stamped their authority on the race from the start, and after their Stage 1 win on Thursday they had a gap of over 3 minutes on the PYGA Euro Steel team. Without a second stage day of racing, that usually descends the Umkomaas Valley and climbs out again, the PYGA Euro Steel team were going to struggle to make up time in the fast third stage down to the coast.

The top three men’s teams stuck together for much of the race, no one taking any chances in trying conditions.

Heyns: “After the first day we had a confidence that we were the strongest here, so we just set a good pace on the climbs to make sure that no one gets away. In the end it was quite muddy dropping down into the last valley and a few of the guys dropped off and rejoined again. Luckily our bikes didn’t have any problems and we rode together with Philip and Matthys until about 5kms from the finish, where they lost contact, I think Philip punctured.”

Du Toit: : “It was unfortunate for them, I think it probably would have come down to an exciting sprint finish. Most of the day we tried to keep on the front to avoid stuff like that from happening, riding on the front is a bit safer. The plan was to go hard in the beginning and get them under pressure. The rest of the time we just tried to stay close to the front and keep it safe.”

Buys: “DSV really deserved the win, they were the strongest riders over the past few days.”

Beukes: “They (DSV) rode defensively, we also had to ride defensively to be in control of second spot from the Insect Science guys. We tried a few times to just push Gert and Arno but to be honest I didn’t have the legs to do that here. Phil punctured and had to ride the last kms on the rim, it was a bit stressful watching over our shoulders for the Insect Science guys. We are quite happy to take second spot.”

In the women’s race, McDougall and De Groot powered their way to a 2 minute lead early on in the race and were able to maintain the lead until they crossed the line at Scottburgh.

McDougall: “We decided just to keep it safe today as we had a 5 minute buffer, there was no point in taking risks. It seemed like we got a good gap anyway and are super happy to take the win.”

De Groot: “We went in with the same objectives, we both agreed on it which is vital. We were keen to see how we felt out there and also check the conditions out, they were pretty sketchy. In these conditions, you work hard the whole time, you can’t lose concentration.”

Hill: “Today was so exciting. As soon as we hit the muddy sections the bikes were slipping and sliding. In the end a race like this is not about when you fall over its how fast you get up again.”

Hill: “For so long we have been the ankle biters, because there are always only two racers, and it is such a privilege now to have our own ankle biters, constantly looking back while we were chasing the dormakaba ladies.”

The 16th edition of KAP sani2c was postponed to December from its usual May dates due to the COVID-19 pandemic, and took place on a much smaller scale to comply with regulations. 500 riders took part in the Adventure from 2-4 December, and less than 500 riders took place in the Race.