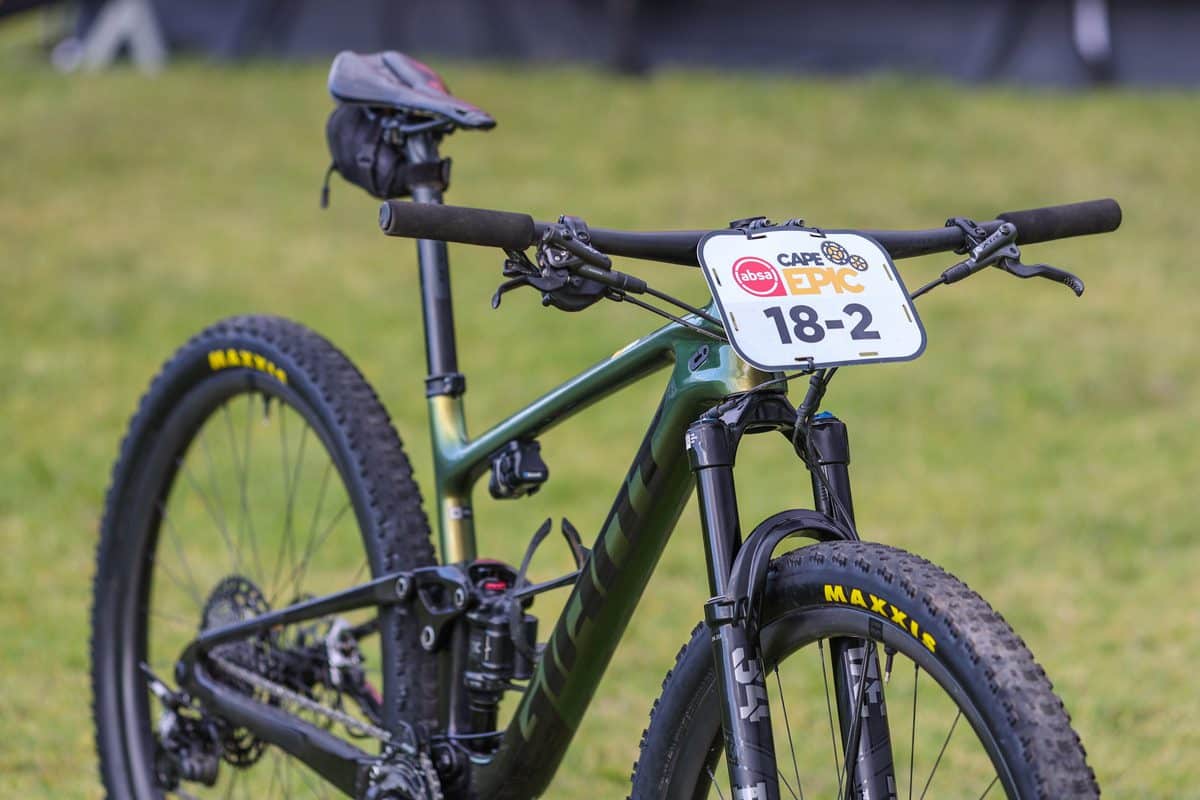 The latest breed of XC and Marathon racing machines have been transitioning to a linkage driven single pivot design with flexible seat stays (or chain stays) standing in place of pivot hardware to save weight. This elegant design balances weight and suspension tunability to find the pinnacle of performance in a short travel package (100-120mm). Manufacturers such as Cannondale, Specialized, and others are among the notable players going for this suspension design and now Giant has joined the pack with a major design shift on the 2022 Anthem platform. They’ve stepped away from their iconic Maestro linkage (though still in use on their longer travel bikes) and I will say that the new design looks fantastic!

“One of the key innovations with the Anthem Advanced Pro 29 is its all-new rear suspension setup. FlexPoint Pro suspension was developed by Giant specifically for XC racing. It’s engineered for efficiency, control and responsive handling, using a linkage-driven, single-pivot design that saves weight compared to the previous design. The result is a smooth, active feel that gives riders 100mm of rear suspension for sublime control on technical singletrack terrain.”

“An all-new Advanced composite frameset, including the main frame and rear swingarm, saves 250g compared to the previous generation Anthem. Overall efficiency gets a boost with a bottom bracket area that’s more than 20 percent stiffer—so racers can accelerate and climb faster with less effort. The frame also adds more than 7 percent torsional stiffness over the previous generation for quicker, more precise handling during intense race efforts.  Beyond that, a steeper seat tube (75.5 degrees) puts riders in a more powerful pedaling position to maximize their efforts on steep climbs.”

The bike has already been tested at the highest level of racing, both under the control of Giant Factory Off-Road’s World Cup team at the 2021 World Cup XCO events, and by our local Imbuko Giant riders Marco Joubert and Tristan De Lange at the 2021 ABSA Cape Epic and FNB Wines2Whales.

The Imbuko Giant riders noted that they could distinctly feel the gains from the stiffer bottom bracket when delivering power, and that would certainly make sense, 20% is a significant gain in stiffness. The increased agility of the bike due to shorter 435mm chainstays was also noted, particularly when the things turned downhill.

Along with the design that has gone into the frame of the 2022 Anthem, there have been some specific component choices made to wring out every millisecond of performance on the track. 30mm internal diameter wheels allow for lower tires pressures to be run in order to increase traction and reduce rolling resistance. The next generation of Fox Live Valve suspension technology is present on the Advanced Pro 1 build of the bike and thanks to some Bluetooth technology, is much easier to set up and configure. The Live Valve is an electronic lockout system developed from Fox’s experience in rally motorsport. It is based to being firmed up for efficient power delivery and will open the suspension before you could even begin to feel a bump. It is quite phenomenal. The updated cockpit includes a composite handlebar with a larger 35mm diameter and ample width for more control and leverage while descending, sprinting and climbing. Efficient power transfer is a recurring theme on the new Anthem.

The 2022 Anthem comes stock with a 110mm travel fork which is testament to the growing capability of modern XC bikes. Now a lot of you may have noticed that a fair few of the World Cup XCO racers are riding bikes with an extra dollop of travel, many of them now sitting in the 110-120mm range. There are 2 converging factors that have dictated this. The increasing demands on the bike to perform in technical terrain as race tracks become more aggressive, and then on the other side, the progression of product design has increased the efficiency of more capable components where there was previously a deficit.

An example of this trend can be seen in Fox suspension having discontinued the classic 32 fork ( their XC specific offering) and filled its spot with the slightly burlier and stiffer 34 SC, deeming the small weight penalty negligible when looking at the performance benefits of the stiffer fork. If the objective of weight saving is to go faster, and you could gain more time with better performance and a slight weight penalty, the logic is to go with the weight penalty and better performance. The evolution of this trend in XCO racing will be very interesting to see as it continues to progress.

Dropper posts also fit into this category of weight penalty for performance benefits and their increasing popularity is testament to the value of the statement and it is great to see the new Anthem being made available with the dropper post as standard. I would argue that break rotor size should be considered in this light as well. Larger brake rotors weigh a bit more but have a huge impact on braking performance. It is well known that the later you can brake, the longer you’re going fast for!

At the end of the day, bikes are inherently compromised and that is what makes them so fascinating. Each manufacturer, designer, product manager, owner, and so on makes choices on where to compromise to reach a desired outcome. The goal of the 2022 Anthem is pure XC racing speed and it has been designed with certain compromises (as any other bike is) to meet that end goal, and it looks like mission accomplished.

“The speeds, technical challenges and level of competition keeps getting higher,” Antoine Philipp, the Giant Factory Off-Road Team’s up-and-coming 24-year-old from France, said. “The bikes and gear matter now more than ever. For the most challenging tracks, the new Anthem Advanced Pro 29 gives me everything I need. It’s super responsive, feels light and lively on the climbs, and gives me more confidence and control on descents, drops and rock gardens that are so decisive in a race.”

“For more than 17 years, Anthem has been about race-winning performance. From World Cup XC podiums over the years to recent marathon world titles and national championship titles around the world, it has helped fuel a hunger to win. That’s the story of Anthem. And this is its next chapter.”

For more information on the new Anthem Advanced Pro 29 series, including all the details on features and technologies, go to https://www.giant-bicycles.com/global/anthem29