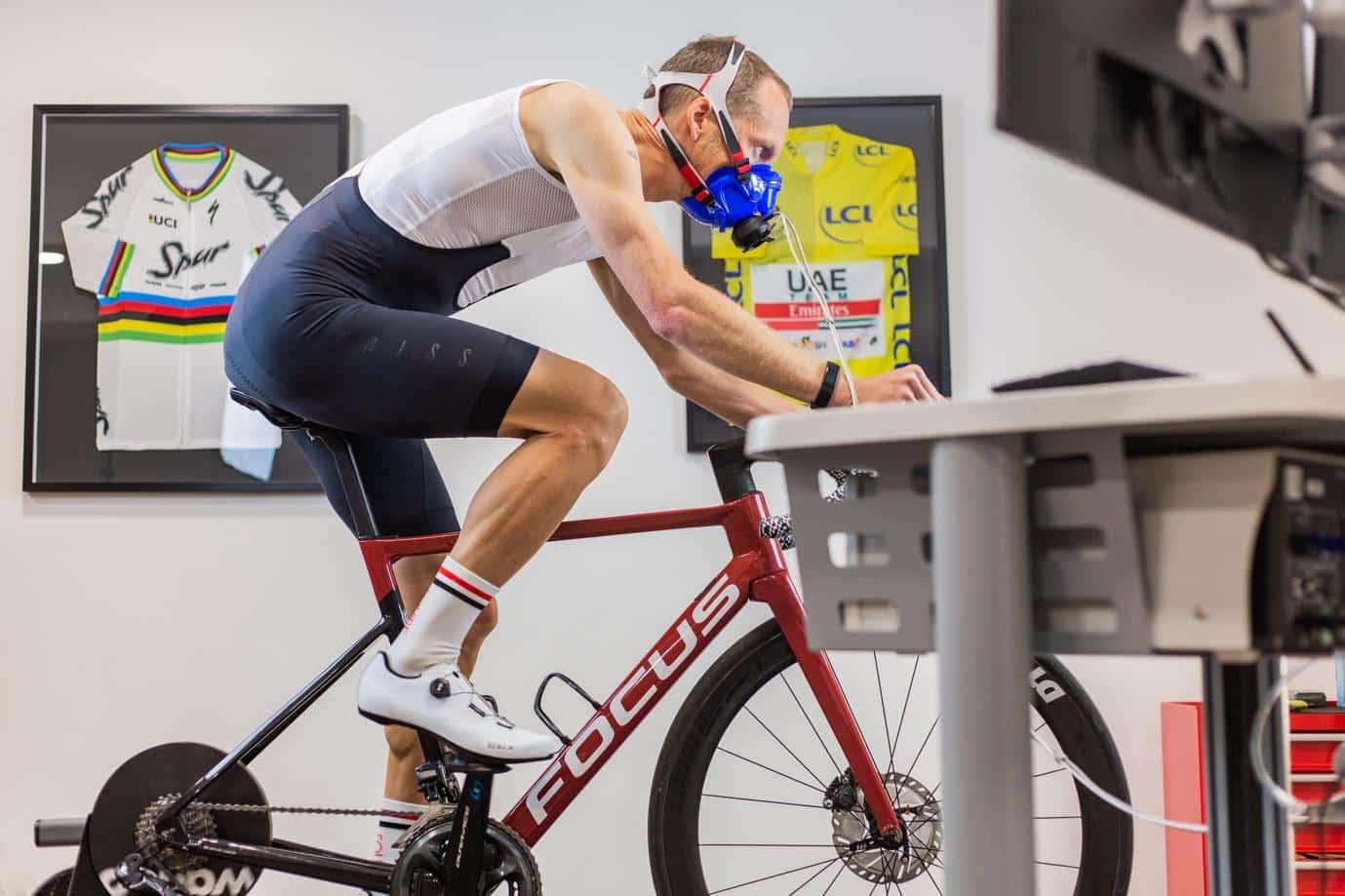 For some, cycling is just a fun pastime but for many of us the element of performance and improvement is always in mind when thinking about our time on the bike! These days the use of cycling performance tests to accumulate training data is increasingly popular for the non-professional rider but knowing which tests to do and how to make use of the data is not always well understood.

Following on from our recent article on deciding whether or not to go with a coach and add structure and benefit to your training going forward, the correct step after identifying the coach would be to determine where you are as an athlete physiologically. This way you will have, for starters, to identify your training zones whether this is just heart rate or heart rate and power to name a few.

Cycling has become very scientific and data filled over the last few years and with power meters becoming easily accessible and lots of knowledge is freely available, you will hear the terms  and discussions around VO2Max, peak power output (PPO), and functional threshold power (FTP) on your local group ride or by the table next to you while drinking coffee at your favourite coffee stop. These terms are associated with cycling performance, but how valuable are they and how can a laboratory test provide accurate data to measure these numbers?

What A Laboratory Cycling Performance Test Is

A performance test provides information regarding the factors associated with cycling performance. The testing is typically conducted under controlled conditions in a laboratory environment. The testing procedure should provide cyclists and coaches with beneficial information.

Tests are valid if they measure what they claim to measure.
For example, performance tests for cyclists should produce data that accurately predicts performance. Reliability refers to the repeatability of the results. In other words, we would expect the same results if we repeated the same testing protocol on the same athlete, using the same equipment under the same conditions.

A laboratory-based test is more reliable than field testing, primarily due to its standardised protocol, equipment (accurate and calibrated) and consistent environmental conditions.

So Why Do We Test Performance?

Testing is done to accurately and objectively determine training zones, assess training status and physiological profile, as well as to evaluate performance improvements.

With accurate training zones, we can create a broad range of intensities that can target specific physiological systems and thus improve training effectiveness. A rider can achieve optimal improvements and progress by training at the correct intensity levels, which targets the correct physiological systems. Training load, stress, and fatigue can also be determined with this data.

A cyclist’s training status refers to their current level of ability. In addition to providing cyclists with a clear idea of their current level, physiological profiling gives riders an indication of where they are relative to others at their level of experience, whether amateur, or professional.

In order to determine if the training has been effective, and to ensure the cyclist continues to train at the correct intensity levels, it is essential to re-assess the zones and physiological level of the cyclist at specific times. Typically, testing is done at a similar time every year, such as at the start of each season or the start of the main training cycle.

The Determinants Of Endurance Performance

A laboratory-based performance test will typically measure the variables below, due to the association between these variables and cycling performance.

Laboratory testing can go one step further, where one can assess a cyclist’s metabolic profile and ability to utilize lactate and fat as fuel sources.

Which Test Should You Do?

The most common types of performance tests done by cyclists include:

These results will identify your individual training zones, which can improve your training by providing an accurate measure of your intensity.

The VO2Max test should provide you with the average power output for the final stage, which is the peak power output. A power meter will give you and your coach a very clear indication of what sort of power output you should aim for during your high-intensity interval training.

As well as determining your threshold power output, the VO2Max test will also determine the equivalent heart rate training zones.

During a ride, our bodies produce energy from 3 internal fuel sources; fat, carbohydrates, or protein, depending on the workload. The two main sources of energy during exercise are carbohydrates and fats. Exercise intensity is the biggest factor influencing how much energy we derive from each of these sources.

At lower intensities, fat represents the majority of our fuel, with a small proportion of carbohydrates. As exercise intensity increases, our body will begin to utilise less fat and increasing amounts of carbohydrates. This is simply due to how much energy our body needs to produce, as well as the rate at which this energy needs to be produced. If you are riding at a low intensity, less energy production is required, and therefore metabolising fat (which takes longer), is the preferred energy source. Once intensity increases and an increased energy demand is required, we cannot oxidise fat at a rate that matches this demand. Therefore, we shift to using higher amounts of carbohydrates.

We only have a limited amount of internal carbohydrate stores (approximately 600g) and therefore need to spare these sources when racing. Teaching your body to utilise greater amounts of intramuscular triglycerides (IMTG) or fat within the muscle, will result in greater energy production at lower and moderate intensities, and allow a carbohydrate sparing effect.

Likewise, with carbohydrate oxidation, our bodies have a way of using excess pyruvate (an energy intermediate). This is done by converting pyruvate to lactate and then re-distributing this lactate to other tissues to be converted back to pyruvate and then continuing along in the cellular respiration cycle. This is particularly useful at intensities ranging from 75 to 85 and even 90% of threshold or FTP.

Both the ability to oxidise fat and lactate are signs of mitochondrial function, and riders who oxidise high amounts of fat across a range of intensities, as well as have low lactate levels across a range of intensities can be seen as well trained and have an excellent oxidative capacity. A great example is Tour de France riders, who are exceptional in their ability to use both fat and lactate as fuel sources.

For most of us, improving these systems is vital to endurance performance and racing. Riders will have different fat max and lactate accumulation intensities, and determining their metabolic profile is vital to ensuring maximal improvement of these systems.

The purpose of this assessment is to define training intensities that allow you to target the metabolic pathways used to oxidise carbohydrates.

The ‘Lactate Accumulation Assessment’ test is performed to determine the intensity at which your body is producing more lactate than you can metabolise (use). During low-intensity exercise blood lactate levels will remain at near resting levels as clearance matches production. Lactate levels will always increase as exercise intensity increases, however, lactate is continually utilised through either oxidising within the muscle or shuttling to other muscle groups and organs to use as a fuel source. Therefore, as exercise intensity increases there comes a breakpoint, where the production of blood lactate exceeds the ability to oxidise lactate.

The results of this assessment will allow training at specific intensities where lactate has increased to a level greater than baseline, but can still be maintained for prolonged durations should be targeted to assist the shift of your lactate curve. Such focused training will assist by shifting your lactate accumulation curve to the right through increasing mitochondrial enzymes, mitochondrial biogenesis, lactate transport proteins, lactate dehydrogenase, and other key enzymes and proteins.

There is a typical range of 10% which is applied to this value, and performing endurance rides within this range will result in maximal fat oxidation and upregulation of the systems involved with fat oxidation.

If you would like to visit a lab to do some of these tests yourself and understand you body and performance better you can check out the following locations:

John Wakefield is a director at Science2Sport. In addition, John works as Head of Coaching and Performance Co-ordinator for UAE Team Emirates World Tour Cycling. With a successful history in motocross, his cycling focus has carried over and found success in a World Championship Title, World Tour and World Cup wins and Multiple National Titles